Mount Ararat Explorers: 'We think it is 99.9 percent that this is it' 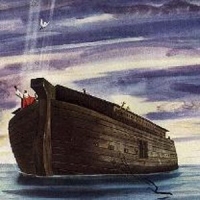 A new claim is being made for the discovery of Noah's Ark, as evangelical explorers from China and Turkey believe they may have found the remnants of the legendary biblical vessel.

"It's not 100% that it is Noah's Ark but we think it is 99.9% that this is it," Yeung Wingcheung, a Hong Kong documentary filmmaker and member of the 15-strong team from Noah's Ark Ministries International, told Agence France-Presse.

The team says it recovered wooden specimens from a structure on Mount Ararat in eastern Turkey at an altitude of 13,000 feet and that carbon dating suggested it was 4,800 years old.

Several compartments, some with wooden beams, are said to be inside and could have been used to house animals, the group indicated. Is this a beam from Noah's Ark? Explorers with Noah's Ark Ministries International have released this photo of a wooden structure it says it has documented at an altitude of 13,000 feet on Mount Ararat in Turkey

Yes, Noah's Ark is completely real! Now find out "what you don't Noah" about the story as well as your spectacular destiny they rarely ever mention in church in this autographed No. 1 best-seller!

Another NAMI explorer, Yuen Manfai, said at the Hong Kong news conference: "The search team and I personally entered a wooden structure high on the mountain. The structure is partitioned into different spaces. We believe that the wooden structure we entered is the same structure recorded in historical accounts and the same ancient boat indicated by the locals." In this photo from Noah's Ark Ministries International, an explorer is investigating a wooden structure on Mount Ararat in Turkey that may be the remnant of Noah's Ark mentioned in the Bible.

The group of archaeologists ruled out an established human settlement, explaining one had never been found above 11,500 feet in the vicinity.

"The search team has made the greatest discovery in history," said Prof. Oktay Belli, an archaeologist at Istanbul University. "This finding is very important and the greatest up to now." Ahmet Ertugrul, leader of the search team, was first to get information on the location before commencing the hunt.

"I got to know the secret location in June 2008," he said. "The source told me that this is Noah's Ark. I took a team there for the search around the region and found a wooden structure. I took some photographs of the interior structure. Since I have worked closely with NAMI for some years, I informed them of the discovery."

Some video of the find has already been posted on YouTube and can be seen here:

The team also said local officials would ask the national government in Ankara to apply for United Nations World Heritage status so the site can be protected during an archaeological dig.

As WND has reported, after centuries of scouring the Earth for Noah's Ark, numerous claims have been flooding in over the past few years regarding possible discoveries of the Old Testament ship.

In June 2006, a 14-man crew that included evangelical apologist Josh McDowell said it returned from a trek to a mountain in Iran with possible evidence of the ark's remains.

The group, led by explorer Bob Cornuke, found an unusual object perched on a slope 13,120 feet above sea level.

They said some of the wood-like rocks they tested proved to be petrified wood.

Meanwhile, another ark hunter is the late Edward Crawford, a former draftsman illustrator for the U.S. military who taught Christian theology at Evergreen Bible Presbyterian Church in the Seattle area.

Crawford made numerous climbs up Ararat and said in 1990, he discovered a large, rectangular structure buried in the ice at an elevation of 14,765 feet.

"I don't have any doubt about it at all, and the Turks don't either," he told WND.

He said the structure sits under snow and ice, which he called "ridiculously hard stuff."

Crawford put much of his discovery online at a website called Project von Bora, where photographs and diagrams are available, and he believed the structure has 90-degree angles. 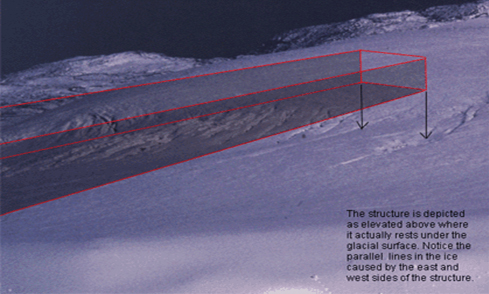 "Those don't happen in nature," he said. "If you think someone went up there to build that, it would take a greater miracle than the Flood [of Noah] itself."

Not far from Crawford's "structure" on Mount Ararat is something which made headlines in March 2006 with the release of a new, high-resolution digital image of what has become known as the "Ararat Anomaly." The location of the anomaly on the mountain's northwest corner has been under investigation from afar by ark hunters for years, but it has remained unexplored, with the government of Turkey not granting any scientific expedition permission to explore on-site.

"I've got newfound optimism ... as far as my continuing push to have the intelligence community declassify some of the more definitive-type imagery," Porcher Taylor, an associate professor in paralegal studies at the University of Richmond, said at the time.

For more than three decades, Taylor has been a national security analyst, and has also ....