By: Sorcha Faal, 10th June 2010
and as reported to her Western Subscribers 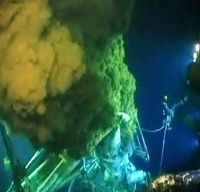 This is unless “extraordinary measures” are undertaken to stop the massive flow of oil into our Planet’s eleventh largest body of water.

Most important to note about Sagalevich’s warning is that he and his fellow scientists from the Russian Academy of Sciences are the only human beings to have actually been to the Gulf of Mexico oil leak site after their being called to the disaster scene by British oil giant BP shortly after the April 22nd sinking of the Deepwater Horizon oil platform. 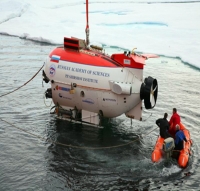 BP’s calling on Sagalevich after this catastrophe began is due to his being the holder of the World’s record for the deepest freshwater dive and his expertise with Russia’s two Deep Submergence Vehicles MIR 1 and MIR 2 (photo adjacent) which are able to take their crews to the depth of 6,000 meters (19,685 ft).

According to Sagalevich’s report, the oil leaking into the Gulf of Mexico is not just coming from the 22 inch well bore site being shown on American television, but from at least 18 other sites on the “fractured seafloor”

The largest of these is nearly 11 kilometers (7 miles) from where the Deepwater Horizon sank and is spewing into these precious waters an estimated 2 million gallons of oil a day.

Interesting to note in this report is Sagalevich stating
that he and the other Russian scientists were required
by the United States to sign documents forbidding
them to report their findings to either the
American public or media, and which they had to do
in order to legally operate in US territorial waters.

However, Sagalevich says that he and the other scientists gave nearly hourly updates to both US government and BP officials about what they were seeing on the sea floor, including the US Senator from their State of Florida Bill Nelson who after one such briefing stated to the MSNBC news service “Andrea we’re looking into something new right now, that there’s reports of oil that’s seeping up from the seabed… which would indicate, if that’s true, that the well casing itself is actually pierced… underneath the seabed. So, you know, the problems could be just enormous with what we’re facing.”

Though not directly stated in Sagalevich’s report, Russian scientists findings on the true state of the Gulf of Mexico oil disaster are beyond doubt being leaked to his longtime friend, and former US President George W. Bush’s top energy advisor Matthew Simmons, who US media reports state has openly said: “Matthew Simmons is sticking by his story that there's another giant leak in the Gulf of Mexico blowing massive amounts of oil into the Gulf of Mexico. On CNBC's Fast Money, he says he'd be surprised if BP lasted this summer, saying this is disaster is entirely BP's fault.”

As a prominent oil-industry insider, and one of the
World's leading experts on peak oil, Simmons further warns
that the US has only two options,
“let the well run dry (taking 30 years, and probably
ruining the Atlantic ocean) or nuking the well.” 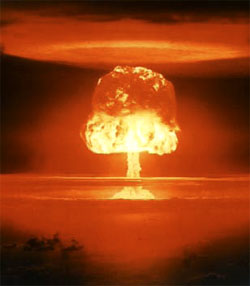 Obama’s government, on the other hand, has stated that a nuclear option for ending this catastrophe is not being discussed, but which brings him into conflict with both Russian and American experts advocating such an extreme measure before all is lost, and as we can read as reported by Britain’s Telegraph News Service:

“The former Soviet Union (U.S.S.R.) used nuclear weapons on five separate occasions between 1966 and 1981 to successfully cap blown-out gas and oil surface wells (there was also one attempt that failed), which have been documented in a U.S. Department of Energy report on the U.S.S.R.'s peaceful uses of nuclear explosions.

Russia is now urging the United States to consider doing the same. Komsomoloskaya Pravda, the best-selling Russian daily newspaper, asserts that although based on Soviet experience there's a one-in-five chance a nuke might not seal the well, it's "a gamble the Americans could certainly risk."

Reportedly, the U.S.S.R. developed special nuclear devices explicitly for closing blown-out gas wells, theorizing that the blast from a nuclear detonation would plug any hole within 25 to 50 meters, depending on the device's power. Much as I had idly imagined, massive explosions can be employed to collapse a runaway well on itself, thus plugging, or at least substantially stanching, the flow of oil.

“Seafloor nuclear detonation is starting to sound surprisingly feasible and appropriate," University of Texas at Austin mechanical engineer Michael E. Webber is quoted observing, while Columbia University visiting scholar on nuclear policy and former naval officer Christopher Brownfield wrote in the Daily Beast: "We should have demolished this well with explosives over a month ago. And yet we watch in excruciating suspense while BP fumbles through plan after plan to recover its oil and cover its asset.”

As to the reason for Obama’s government refusing to consider nuking this oil well, Sagalevich states in this report that the American’s “main concern” is not the environmental catastrophe this disaster is causing, but rather what the impact of using a nuclear weapon to stop this leak would have on the continued production of oil from the Gulf of Mexico, and which in an energy starved World remains the Planet’s only oil producing region able to increase its production. On top of the environmental catastrophe currently unfolding in the Gulf of Mexico the situation may about to get even worse as new reports from the US are confirming the grim predictions of Russian scientists regarding the oil dispersement poisons being used by BP which are being swept up into the clouds and falling as toxic rain destroying every living plant it touches, and as we had detailed in our May 23rd report titled “Toxic Oil Spill Rains Warned Could Destroy North America”

To what the final outcome of this catastrophe will be it is not in our knowing other than to state the obvious that the choice facing the American’s today is to either stop this disaster now, by any means, or pay dearly for it later.  After all, is cheap petrol really worth the cost of destroying our own Earth?  BP surely thinks so, let’s keep hoping Obama doesn’t.