You are here: Home / Disasters / 28 Signs That The West Coast Is Being Absolutely Fried With Nuclear Radiation From Fukushima

The map above comes from the Nuclear Emergency Tracking Center.  It shows that radiation levels at radiation monitoring stations all over the country are elevated.  As you will notice, this is particularly true along the west coast of the United States.  Every single day, 300 tons of radioactive water from Fukushima enters the Pacific Ocean.  That means that the total amouont of radioactive material released from Fukushima is constantly increasing, and it is steadily building up in our food chain. 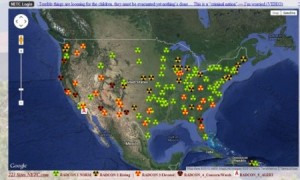 Ultimately, all of this nuclear radiation will outlive all of us by a very wide margin.  They are saying that it could take up to 40 years to clean up the Fukushima disaster, and meanwhile countless innocent people will develop cancer and other health problems as a result of exposure to high levels of nuclear radiation.  We are talking about a nuclear disaster that is absolutely unprecedented, and it is constantly getting worse.