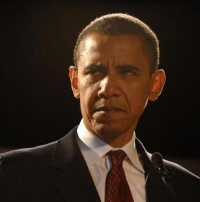 The impact of Obama's first year as US President
... undermining the US Constitution and the building of a Framework for Dictatorship and Total Population Control!

Barack Obama was inaugurated as the 44th President of the United States on Tuesday January 2009. He was voted in on a campaign of ‘change’ by a population tired of Republican policies.

So far he has spent more money than any other President in history to bring US debt to bankruptcy levels. He has also passed more tax increases onto middle Americans. But perhaps the most concerning aspects of his presidency are his willingness to ignore the Constitution, his maintenance and expansion of a surveillance society, while ignoring people’s rights and initiating interventionist military buildups. In his first year unemployment has risen from 13 million to 14.7 million, the national debt has leapt from $10.6 trillion to $12.3 trillion, troop numbers for the Afghanistan war have increased from 34,400 to 70,000 and in his recently announced budget he allocated 4.3 billion for nuclear weapons [$370 million more than George Bush spent].

President Obama has been very busy following in his predecessor’s footsteps issuing Executive Orders which bypass the Congress and the Constitution.

On his first day in office President Obama signed Executive Order 13489 which allows that only those personal records that he chooses will be made public. This is a very convenient solution to the controversy over his birth certificate. Why would he do this unless he has something to hide? Just before Christmas with no publicity Obama signed Executive Order 13524 which amended Executive Order 12425. This order grants INTERPOL (International Criminal Police Organization) full rights to operate on American soil and places it beyond the reach of the US’s own law enforcement agencies such as the FBI. Under this Executive Order Interpol can operate free from interference, can avoid FIOA [Freedom of Information Act] requests, cannot have their assets / property seized and are immune from prosecution.

In other words they are above American law and the Constitution; there is no public accountability or official transparency. Interpol can legally keep files on all US citizens with no right of redress allowed.

The Patriot Act: Many of the provisions were set to expire on January 1st and many members of the House of Representatives wanted to reform it to strengthen civil liberties protection. However Congress has put off addressing it till the end of February. The provisions due to expire involve The Material Support Statute, the National Security Letters and the Foreign Intelligence Surveillance Act. Obama doesn’t want to reform it as that would mean giving the people back some of their privacy that was taken but which is theirs by right under the Constitution.

When the Patriot Act came before the Senate and House of Representatives members were not given time to read it. Ron Paul and a few Senators were allowed 15 minutes only to read this complicated 315 page document on the House Intranet. A copy of the US Criminal Code would need to be read alongside it to understand it. There was no provision for debate in Congress on this bill.

On January 11th 2010 President Obama signed Executive Order 13528. Again the White House tried to slip this new executive order very quietly through. It establishes a Council of Governors, supposedly strengthening partnerships between the Federal Government and State Government. This Council will be made up of 10 State Governors, Secretary of Defense, Secretary of Homeland Security, Assistant to President for Homeland Security and Counterterrorism, Assistant to President for Intergovernmental Affairs and Public Engagement, Assistant Secretary of Defense for Homeland Defense and America’s Security affairs, US Northern Command Commander, Commandant of the Coast Guard, Chief of the National Guard Bureau and other appropriate officials. What this Executive Order actually means is that there will be expanding military involvement in domestic security, provides the framework for Martial Law and further undermines the Posse Comitatus Act of 1878 that bars the military from exercising domestic police powers. Obama is laying the groundwork for his promised “national civilian security force”.

The possibilities of tyranny occurring, the totalitarian control of a Nation that once prided itself as a leader of the free world are fast becoming a reality set in a backdrop of total avoidance by the mainstream media.

The importance of this Executive Order needs to be viewed in the context of PDD 51 [Presidential Decision and Directive] signed on May 9 2007 by Bush.PDD 51 gives the President total unprecedented dictatorial power in times of “declared emergency’ – it doesn’t have to be a genuine emergency!  Just a declared one! The President can take total control over government and the country, bypassing all other levels of government.

Unless the American people wake up to what is happening and fight  for their freedom and rights it is becoming clear that  America will soon be a fascist state.

Since the article above was written ... On February 27th President Obama renewed the Patriot Act after both the Senate and the House of Representatives signed the extension last week. Privacy protections set to be added to the Act were dumped due to insufficient votes from Congressmen.