You are here: Home / Science / A Big Month For Genes

A Big Month for Genes 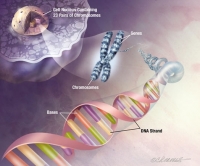 It is hard to imagine the upshot of a cascade of discoveries currently being made about human DNA.

From a decade ago, when the human genome was first mapped, progress has been swift.

This month, findings about DNA have taken us closer than ever before to understanding the genetic genesis of some pretty massive public health epidemics such as obesity and dementia.

At the same time, strides are being made in reproductive technology and are already being employed to try and avert problems with faulty DNA.

The first big breakthrough in April was the news that scientists had transferred DNA between human eggs, creating embryos that contained genetic material from two females and a male.

Hoping to combat diseases plaguing 1 in 200 people across the globe, including heart failure and diabetes, a team of scientists extracted a mother's and father's nuclear DNA, or "pronuclei" from a newly fertilised egg. The next step was placing it into a fertilised egg where the nuclear material was removed, but the second female donor's mitochondria remained (mitochondria is often called the cell's "batteries").

With this fusion, problematic mitochondria leading to these potentially fatal diseases can be sidelined, allowing women who know they carry these problems to have children with the help of reproductive technology - and 0.2 per cent of the DNA of another woman.

In the same way that genetically modified organisms strike fear into the hearts of some, this so-called "germ-line gene therapy" has lead some to warn that we do not know where fooling around with DNA will lead.