Survey: Two-Thirds of Evangelicals Doubt Jesus' Words Regarding Salvation Thru Him Alone

There's a new poll out which points to a growing rejection among Evangelicals that Jesus is the only way of salvation.

For years, most evangelical Christians have been taught and accepted the words of Jesus in John 14:6, where He states, "I am the Way, the Truth, and the Life, and no man cometh unto the Father but my Me." But now a new Newsweek/Beliefnet poll is showing a shocking number of people who call themselves evangelical and born-again have come to reject those words.  The question in the poll read "Can a ...

... "Can a good person who isn't of your religious faith go to heaven or attain salvation, or not?" According to the poll results of more than 1,000 adults 18 years of age and older, 68 percent of evangelical Christians believe "good" people of other faiths can also go to heaven. Nationally, 79 percent of those surveyed said the same thing, with an "astounding" 91 percent agreement among Catholics, notes Beliefnet. Beliefnet spokesman Steven Waldman calls the results "pretty amazing." 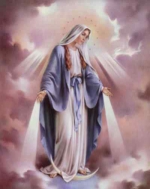 A conservative Anglican activist is criticizing the response of the Episcopal Church USA (ECUSA) to revelations that two of its priests embrace the worship of pagan deities.

Some members of the Worldwide Anglican Communion say they are not the least bit surprised by the latest heresy to surface in the American Episcopal Church -- a pagan liturgical rite promoted on the denomination's website.

The ECUSA's Office of Women's Ministries recently touted a resource called the "Women's Eucharist: A Celebration of the Divine Feminine," which encourages worship of a so-called "Queen of Heaven."

The next meeting of the United Methodist Church's highest tribunal will review an unusual dispute about discipline. It involves whether the Rev. Edward Johnson should have been put on forced unpaid leave because he refused a homosexual who wanted to join his congregation in South Hill, Va.

The evangelical Good News caucus says the gay applicant is living in a relationship with another man and "unrepentant about his practice" so Johnson was merely applying Methodism's teaching against same-sex behavior.

But Virginia's Methodist clergy decided Johnson violated church policy, both in rejecting a homosexual and in defying directives to accept him that came from the bishop and district superintendent. The case attracts attention because it's rare nowadays for a pastor to attempt to bar or discipline a lay member. U.S. congregations largely ignore the Bible's teaching about discipline and the result is "the impending collapse of authentic Christianity in this generation," asserted the Rev. R. Albert Mohler Jr., president of Southern Baptist Theological Seminary.

An alarming number of Christians are staying home on Sunday mornings and the trend is affecting today's church. Believers who have become "stayaway saints" are alternately worrying and exciting church leaders, pointing to what is being seen as either a serious threat to the spread of the gospel or the actual cusp of a revolution that could usher in the sort of revival many have prayed for and dreamed of for years.

A recent study found that about 13 million Americans whom the researchers identified as being born again were "unchurched ... not having attended a Christian church service, other than for a holiday ... at any time in the past six months." 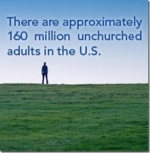 The proportion of Americans who say they have no religious affiliation doubled over the last decade and now stands at 16% of the population, according to a new study on religious identity. Only Catholics (24%) and Baptists (17%) outnumber the so-called "non-identifiers," or "nones," said the report.

Based on telephone interviews with more than 10,000 randomly selected people, said about one in six answered "none" or "no religion" or described themselves as secular, humanist, ethical-culturalist, agnostic or atheist.