Throughout recent weeks Christians all over the globe will have been observing Easter by remembering the death and celebrating the resurrection of Jesus Christ.

At this time of year we are often bombarded by an increase in press, radio, and television programming addressing the claims of Christ and the historical accuracy of Biblical accounts.  Such commentary usually raises important questions. Why do we believe the Bible is accurate? Is it more than just a history book? What makes it different from all other religious books? Such questions are on the minds of many, and as Christians we should have a ready answer when asked why we believe what we believe. In the 20th century we have witnessed one of the most remarkable discoveries in recorded history: the discovery that the universe is finite. The implications of this discovery are indeed staggering. Beginning with Albert Einstein in 1903, twentieth-century physicists have demonstrated that space-time and matter had a finite, simultaneous beginning. Prior to this discovery, atheistic scientists and philosophers rested comfortably on the notion that the universe was eternal. Consequently, a universe without a beginning needed no cause, it just existed. However, a universe that has a beginning either created itself (a logical and scientific absurdity) or it was caused to exist by a Being who preceded it.

By definition, that means a transcendent Creator,
One who exists outside time and space 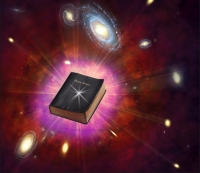 The Bible declares that God is omniscient (all-knowing). He possesses a perfect understanding of the physical universe. Consequently, we would expect any book claiming to be the word of God to be without error or contradiction when it speaks on scientific issues. Well, not only is the Bible 100 percent accurate regarding scientific phenomenon, it revealed many scientific facts thousands of years before they were discovered by scientists (i.e. that time, space, and matter are finite, the universe is expanding, the spherical nature of the earth, the laws of thermodynamics, the oceanic currents, etc.)

Throughout the Bible’s text there are highly specific and accurate statements regarding the laws of physics, the nature of our solar system, the planet earth, and its life forms that were penned centuries before this scientific knowledge was discovered by the scientific community. This phenomenon, called scientific foreknowledge, is present throughout the text of the Bible and is a powerful hint of supernatural authorship. Throughout the Bible we find the fingerprints of a supernatural message system. Numerous design features in the Biblical text defy coincidence and demonstrate that the Bible, which consists of sixty-six books, penned by forty authors over thousands of years, is an integrated message system. Because God exists outside our space-time domain, He is able to see, in effect, the beginning and the end of our time domain simultaneously. Consequently, the Bible authenticates that its message is of extra-dimensional origin through predictive prophecy (i.e. by writing history in advance). Astonishing evidence has gradually accumulated in the fields of archaeology, astronomy, physics, and biology which confirm the scientific and historical accuracy of the Bible, the supernatural origin of its text and the fact that it has been preserved virtually unchanged for over two thousand years.

No other Holy Book on Planet Earth
authenticates its message in these ways.