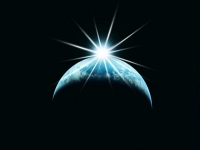 Livermore, California (CNN) -- Scientists at a government lab here are trying to use the world's largest laser -- it's the size of three football fields -- to set off a nuclear reaction so intense that it will make a star bloom on the surface of the Earth.

The Lawrence Livermore National Laboratory's formula for cooking up a sun on the ground may sound like it's stolen from the plot of an "Austin Powers" movie. But it's no Hollywood fantasy: The ambitious experiment will be tried for real, and for the first time, late this summer.

If they're successful, the scientists hope to solve the global energy crisis by harnessing the energy generated by the mini-star.

The lab's venture has doubters, to be sure. Nuclear fusion, the type of high-energy reaction the California researchers hope to produce, has been a scientific pipe dream for at least a half-century. It's been pitched as a miracle power source. But it hasn't yielded many results.

To make matters worse, the U.S. Government Accountability Office this month released an audit of the lab's work that cites delays and mismanagement as reasons it's unlikely the scientists will create a fusion reaction this year.

But researchers in Livermore, about an hour's drive east of San Francisco, say it's not a matter of if but when their laser-saves-the-Earth experiment will be proved successful.

"We have a very high confidence that we will be able to ignite the target within the next two years," thus proving that controlled fusion is possible, said Bruno Van Wonterghem, a manager of the project, which is called the National Ignition Facility.

That would put the lab a step closer to "our big dream," he said, which is "to solve the energy problems of the world."

How to build a star

Here is the boiled-down recipe for how the Livermore lab plans to cook up a star:

Step one: Build the largest laser in the world, preferably inside a drab-looking office building. (To do this, you'll have to suspend all previous notions about what a laser looks like. This one is basically a giant factory full of tubes. The laser beam, which is concentrated light, bounces back and forth over the distance of a mile, charging up as it goes.)

Step two: Split this humongous laser into 192 beams. Aim all of them -- firing-range style -- at a single point that's about the size of a BB.

Step three: On that tiny target, apply a smidge of deuterium and tritium, two reactive isotopes of hydrogen that can be extracted from seawater. Surround those atoms with a gold capsule that's smaller than a thimble.

If all goes well, the resulting reaction will be hotter than the center of the sun (more than 100 million degrees Celsius) and will exert more pressure than 100 billion atmospheres. This will smash the hydrogen isotopes together with so much force and heat that their nuclei will fuse, sending off energy and neutrons.

Voila. An itty-bitty star is born.

The fusion reaction at the heart of this recipe is the same one that fuels the sun in our solar system and other stars.

"It's the most fundamental energy source in nature," Van Wonterghem said.

Workers at the Livermore Lab insist that the reaction isn't dangerous. Their version of fusion is controlled, rather than explosive like in America's current arsenal of nuclear weapons, which include a fusion reaction.

"There's no danger to the public," said Lynda Seaver, spokeswoman for the project.

"The [worst possible] mishap is, it doesn't work."

The fusion reaction does emit radioactive neutrons. But to stop those neutrons from escaping, the Livermore lab surrounds the reaction chamber with concrete walls that are more than 6½ feet thick.

Despite the fact that the reaction will "even exceed the conditions at the center of the sun," Van Wonterghem said, the controlled fusion is expected to be incredibly small and short-lived.

The star being cooked up in Livermore this summer is expected to die 200 trillionths of a second after it's ignited, Van Wonterghem said.

And it will measure only 5 microns across, which is several times smaller than the width of a human hair.