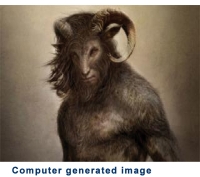 THE community of Lower Gweru and its surroundings in the Midlands Province, Zimbabwe, was left shell-shocked when a goat gave birth to human-like creature that had the combined features of a man and a goat.

A report in The Chronicle newspaper said the goat gave birth to the 'creature' on Sunday morning (September 2009) in Maboleni area.  The creature had a human head, face, nose, shoulders and human-like skin that had very scanty furs. It had goat features from the “shoulders” to the legs. Its sagging stomach prevented curious villagers from determining whether it had human or animal sex organs as it protruded covering the front part.

Villagers said the end product was so scary that even dogs were afraid to move close to the goat. “Normally, dogs like to play around a goat when it has just given birth. This time the dogs kept their distance. This is indeed a miracle that has never been witnessed anywhere,” said one elderly villager, Themba Moyo.  The owner of the goat who gave his name as Mr Nyoni said the incident left him shocked and he decided to contact the police and the local leadership. 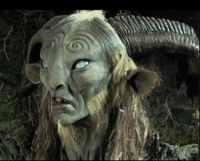 “It’s the first time that my goat did this. I have 15 goats and it’s this goat that gave me birth to most of them. My goats often give birth to sets of twins,” he said. His wife, Mrs Nyoni, said she never bothered to check when she learnt from her daughter that her goat had given birth.

She said she was busy with her laundry and she only learnt from her brother-in-law that the goat had given birth to an unusual creature. “By that time the ‘thing’ had died. My brother-in-law then decided that we inform the community and the leadership about this unusual incident,” she said. 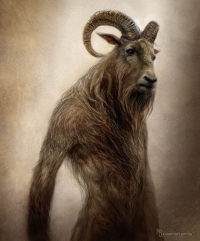 Midlands Governor and Resident Minister Jason Machaya, police and the media visited Maboleni area to have first-hand information. Governor Machaya said it was disgracing that a man can stoop so low opting for animal company in a world full of women. “This incident is very shocking. It is my first time to see such an evil thing. It is really embarrassing. The head belongs to a man while the body is that of a goat. This is evident that an adult human being was responsible. Evil powers caused this person to lose self control,” he said.

“We often hear cases of human beings who commit bestiality but this is the first time for such an act to produce a product with human features.” Fauns, half-human and half-goat are creatures in Roman mythology. They are often depicted as a creature with the body of a man and the legs and horns of a goat. This is the first time that such a creature has actually been seen."

Typically Satan is often depicted, on his throne, as a goat like being.  The image below, and others used in this article are illustrations, and are not intended to be a photographic capture of a real faun, demon, or mythological creature.