You are here: Home / Deception / The Continuing Attack On Our Children Through Education & The U.N. Recently the South Australian Non Government Schools Registration Board [SANGSRB] has issued a directive which effectively bans or prohibits the teaching of creationism and intelligent design in science classes. If students are even exposed to the possibility that the Bible’s account of creation could be true, and that there is evidence from highly qualified scientists to support this, then the school could lose its registration and be forced to close. Science teachers cannot use the topics of ‘creation’ and ‘intelligent design’ for debate, or even to develop critical thinking skills and make sense of evidence. There will be no discussion of the evidence available in the archeological, geological and paleontological records which support the Bible’s account of creation, and no opportunity for students to reflect on the design of cells demonstrating the fingerprint of God. The only mention of Genesis and the Bible would be in ‘religious classes’.

A similar policy is in place in New South Wales. Victoria has no formal restriction yet, but it is well known that inspectors apply informal pressure with the inference that a registration may be withdrawn if a school does not comply. Concerned parents and faith based educators see this as the thin end of the wedge. No teaching of creationism today, tomorrow forcible promotion of non Christian or antichristian values.

Pressures on Christian schools are growing as increasingly hostile and antichristian government ministers, officials and educators in influential positions set policies in education.

For example on February 24th 2010 in the United Kingdom a new Sex Education Bill was passed in the House of Commons.  Under the Bill, both faith based and secular schools will be required to instruct children with information on homosexual relationships, contraception and abortion. These schools  do not have a choice, even if the material to be taught conflicts with their stated values and beliefs. Schools will have to give specific information to students on how to obtain abortions and contraceptives.  They are also required to promote civil partnerships and homosexuality as ‘normal’.

The main lobbyists and supporters of this Bill are homosexual lobby groups and secular humanist organizations. Defying comprehension is the fact that this diabolical initiative has the wholehearted support of the Catholic Education Service and the Church of England.

Parents will have the option to withdraw their children from these classes, but only for those children aged 15 years and younger. This means that all students will receive a minimum of one year’s instruction and diabolical indoctrination, whether their parents support the content or not. Records show that in the past very few parents choose to exercise the option to withdraw. 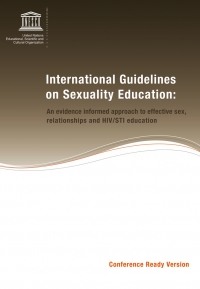 The United Nations is at the forefront of the promotion of sex education. UNESCO has developed a radical and controversial curriculum to be implemented globally, which provides for teaching on a range of topics to children from five to eighteen. It represents a sweeping and evil agenda written to impact children throughout the world, teaching them in detail about ‘sex’ at a very young age. For example, five to eight year olds will learn about tolerance of sexual orientation and acceptance of the normality of same sex couples, masturbation and AIDS. Nine to twelve year olds will have teaching on contraception and abortion.

Outrage has been expressed by a number of groups, particularly Christian and parenting organizations but the UN was finalizing it at the end of 2009 and seemed determined to pursue this programme, come what may.

There is a need however for a greater groundswell of resistance and abhorrence from within Christendom in that sector of society at large that hold to a traditional and decent sense of morality.

The challenge here is to be passionate, vocal and outspoken in expressing contempt for this evil and depraved agenda.

S. Anderson is an Omega times columnist and editor with a background as a primary school teacher, a lecturer and curriculum developer of tertiary training in Early Childhood Education. She has also been involved in senior pastoral ministry with over fifteen year’s experience.