You are here: Home / Church / Archbishop of Canterbury inspires Heretical Book about Jesus and his twin brother ‘Christ’

When I arrive at the South Bank Centre to hear Philip Pullman talk about his new book The Good Man Jesus and the Scoundrel Christ, I half expect to be surrounded by crowds of furious protesters.

But rather than being berated for the latest slight he has apparently made to the Christian church, Pullman is enthusiastically greeted by the faithful.

There is not even an awkward question - unlike at a recent literary festival in his hometown, Oxford. When asked by an audience member to justify describing Christ as a "scoundrel", the 63-year-old writer insisted "nobody has the right to go through life without being offended". 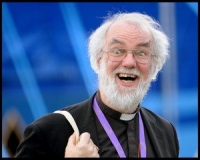 The genesis of the story arose from a discussion Pullman had with the Archbishop of Canterbury, Rowan Williams, who asked whether he would consider exploring the life of the Son of God.

Pullman's central conceit is that Jesus had a twin brother, Christ, who lived in his sibling's considerable shadow. Christ secretly documents and engineers Jesus' rise and fall, taking the place of Judas in the narrative as he eventually betrays him to the Romans.

While he endowed his main protagonists with mystical abilities in His Dark Materials, Pullman rationalises Jesus' miracles.

"I wanted to write about Jesus as a human figure, a man in a particular situation. A very gifted, charismatic man but an everyman, not a god."

He provides simple explanations for seemingly extraordinary events such as the Feeding of the 5000. Rather than magically transforming five loaves of bread and two fish into enough food for an entire multitude, he merely instructs them to share around what they already have.

"It's not possible to walk on water or to turn water into wine," he says. "That's a fairy tale, it's not a serious piece of historical reportage.

It's necessary for the story and for the process of making Jesus appear divine.

I have no doubt he had a very strong physical presence, because we've all met people who are like that.

Just being in the room with them fills you with energy and makes you feel good.

It's not surprising that people who were ill would have felt a lot better around him."

He even claims that the Resurrection was a case of mistaken identity.

"That's the story most Christians would like to believe but I think it just happened by chance.

He was in the wrong place at the wrong time. His body disappeared after the burial but there are many ways that could have happened.

Perhaps somebody thought they saw him when they went to the cemetery the following morning but they saw someone else who looked like Jesus."

Omegatimes footnote to the Archbishop of Canterbury:

Thank you, Your Grace, for your contribution to this profoundly inspiring and thought provoking publication!  Why didn't you seek to bring this author to a place of salvation rather than point him in the direction to lead many astray?  You also, Your Grace, will be held accountable for your part in this WORK of ANTICHRIST

(2 Peter 2:1  But there were false prophets also among the people, even as there shall be false teachers among you, who privily shall bring in damnable heresies, even denying the Lord that bought them, and bring upon themselves swift destruction.)

To read the complete article by Stephen Jewell ... click here