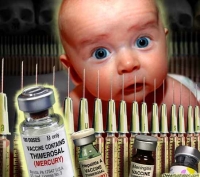 More and more parents from around the country are recounting horrific flu jab experiences amid mounting controversy over adverse reactions to the seasonal flu vaccine.

Australia’s chief medical officer, Professor Jim Bishop, has urged doctors not to use the vaccine on children under five years of age.

This follows the concerns of  Professor Peter Collignon, director of Infectious Diseases & Microbiology at The Canberra Hospital, regarding the need for the vaccine at all!

Professor Jim Bishop's announcement follows the more than 250 reports of adverse reactions – a figure experts and parents fear is being severely underestimated.In Queensland, health authorities are also investigating the death of a two-year-old Brisbane girl, which may be linked to the flu vaccine.

As the vaccine saga unfolds, whether or not to vaccinate has also been a hot topic in online parenting forums such as Essential Baby, where hundreds of mothers and fathers have expressed their fears and detailed nightmare stories of their children’s reactions.

Australian authorities are investigating the death of a Queensland toddler within 12 hours of her receiving a seasonal influenza vaccination.  New Zealand's Health Ministry has told doctors not to give the Fluvax brand of vaccine to children under five years of age.

Australian government ordered a halt in that age group because of an unexpectedly high number of cases of fever-related seizures in Western Australia.

New Zealand's Health Ministry has told doctors not to give the Fluvax brand of vaccine to children under 5, after the Australian government ordered a halt in that age group because of an unexpectedly high number of cases of fever-related seizures in Western Australia.

Three cases of fever-related seizures in children under 5 following Fluvax injections have been reported to the NZ Centre for Adverse Reactions Monitoring at Otago University in this flu season.

Dr Pat Tuohy, the ministry's chief adviser on child and youth health, said yesterday all three cases had been hospitalised, but he was not aware of any deaths in New Zealand.

The Government is funding three brands of flu vaccine this flu season. Fluvax supplies are thought to have run low.

Dr Tuohy said doctors should give the Vaxigrip brand to young children.

Her twin sister Jaime received the flu injection at the same time and is believed to have been vomiting the night before her sister died.  Their father, David Epapara, when asked if the vaccine was involved in Ashley's death, said: "It's very coincidental."

In Western Australia, 22 children have been hospitalised for high fevers and seizures after receiving Fluvax.