You are here: Home / Political Control / “Obamacare” – Far More Than A Healthcare Plan On the 23rd of March this year, 2010, President Obama signed into law HR 3590 The Patient Protection and Affordable Care Act, otherwise known as ‘Obamacare’.

This controversial and unpopular piece of legislation required secret meetings and last minute deals behind closed doors in order to pass.

For example, the President agreed to sign an Executive Order after the Act was passed to limit federal funding of abortions to ensure the vote of prolife congressmen.

On the surface this Act is supposed to be about ensuring that more Americans are provided for in terms of medical care. However both this Act and the Recovery and Reinvestment Act, otherwise known as the ‘Stimulus Bill’ passed in February 2009 provides the framework and the authorization to enable dictatorial control over many aspects of Americans lives.

Here is an overview of the most alarming provisions. Finance experts estimate the true
cost of this healthcare plan to be
a whopping $1.6 trillion dollars.

There are at least fifteen new taxes and penalties in the Act. E.g. the Excise Tax on Uninsured Individuals – If an individual or business with more than 50 employees is deemed by the authorities not to have ‘acceptable’ healthcare coverage they will be fined $750 per month for individuals and $750 per month per employee. For a family of 4 this would mean $2250 per month or $27,000 per year.

The Act will impose financial hardship on middle class Americans who will be forced to buy a product they cannot afford to use. An average family plan would cost around $15,200 per year on top of taxes.

Illegal immigrants will get free healthcare insurance, subsidized by the taxpayer.

The Act has been written so that companies like Walmart will qualify for subsidies for its employees and the taxpayer will pick up a large proportion of the cost. Doctors and hospitals will be monitored by a bureaucracy created under this Act to make sure they follow the preset guidelines for what is appropriate and cost effective treatment in order to save money rather than give the best outcome for the patient.

If doctors and hospitals are not ‘meaningful users’ of the new system they will face penalties.

These are not defined in the Act but are under the discretion of the Secretary of Health and Human Services Kathleen Sebelius.

Each doctor will have a personal report written about them and their practice of medicine. The report will be measuring the resources they use, will assess the quality of care provided and will compare their care with other doctors – in other words they intend to make sure that doctors are giving cheap care. There is no room for choice of treatment – a preset guide must be followed.

A Method of Population Control:

Obama has openly stated that this Act will include rationing of healthcare services. The disturbing aspect is how the rationing will be determined.

Hidden in the Stimulus Bill was over a billion set aside to fund the Federal Coordinating Council For Comparative Effectiveness Research – the unelected body responsible for decisions on rationing. This bureaucracy was the brainchild of Tom Daschle who states ‘Americans should be more like Europeans who passively accept hopeless diagnoses’! 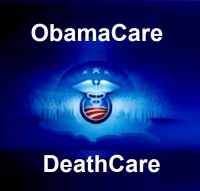 Overseeing this body is Ezekiel Emanuel, Obama’s chief advisor on healthcare and brother of Rahm Emanuel, Whitehouse Chief of Staff. Ezekiel Emanuel is well known for his eugenics views and in 2008 wrote a book entitled “Healthcare Guaranteed” which is a carbon copy of the structure being used. The so called ‘Death Panel’ or Medical Advisory Board will oversee his “Complete Lives System” (announced in July 2009) for withdrawing care from those chosen for death. This system produces a curve on which individuals aged approximately 15 to 40 years old get the most substantial care whereas the oldest and youngest are expendable.

Under his system a 20 year old is deemed to be of more importance than a 2 year old because the 2 year old has had less life as opposed to the substantial investment in the 20 year old in terms of education, parental care and that they have now developed a personality!!! Emanuel is of the view that the Hippocratic Oath taken by doctors to uphold life should be removed so that doctors can be less thorough and more cost cutting. He believes that doctors should be prudent in assessing how much time, effort and money each patient is worth. be instructed not to offer costly
treatments that prolong life.

These government appointed board officials will have access to your medical records to determine what, if any, treatment a person outside of the key age groups will be allowed to have.  This will be especially applicable to the elderly, terminally ill, disabled, those in a vegetative state, Alzheimer’s/ Dementia sufferers, mentally ill and those who in Emanuel’s own words from the Hastings report “are prevented from being or becoming participating citizens” .

Cancer treatment will be rationed and people will be sent home to take Panadol! Is this reminiscent of Nazi Germany?

A similar system has been active in the United Kingdom where people are routinely denied treatment for cancer, heart disease and other serious illnesses and subsequently die.

The Act is mandating that all Americans buy a government approved healthcare plan. It is the first time that a government has ever ordered US citizens to purchase any good or service. Some states are now challenging the Act as unconstitutional on this basis.

People will have very little if any choice over their healthcare plan. Millions of Americans will lose their doctor and their current plan once businesses, insurance companies and medical device manufacturers inevitably raise their prices, which they have stated they will.

Under the section on improving the health of American people, methods of immunization promoting interventions are given including ‘State Vaccine Teams’ to conduct interventions in private homes. A citizen’s financial records, mortgage documents, medical records and healthcare status will be able to be accessed and scrutinized.

In order to achieve this policing, the IRS will be expanded by approximately 16,500 new armed agents.

Buried in the Act is Obama’s Private Army – ‘the Healthstapo’, commissioned officers of the Ready Reserve Corps who are appointed by the President and at all times are subject to call to active duty by the Surgeon General but have not sworn allegiance to the constitution.

The Act refers to the National Medical Device Registry – the device being a class 2 implantable radio frequency transponder system for patient identification and health information. Initially power is given to the Secretary for Health and Human Services over the collection of medical data but it can open the door for microchipping of people. At the very least there will be a national biometric ID card. 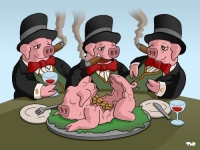 As George Orwell quoted in ‘Animal Farm’; “Everybody is equal but some are more equal than others”. The Act has been written so that a loophole exempts Washington insiders from mandated healthcare coverage. Members of Congress and their office staff do have to comply but people working for Congressional Committees or Party Leaders in the House and Senate are excluded.

This means the President, Vice President, Cabinet members and top White House staff are exempted from the directive to buy a federally approved plan.

In summary this healthcare legislation
is all about control of people’s lives,
determining who is of worth and
who should be discarded and cost cutting.
It is not about improving the lives
of ordinary Americans.