You are here: Home / Antichrist / One in Three High Schools in UK are Fingerprinting Pupils as Big Brother Regime Sweeps Education System 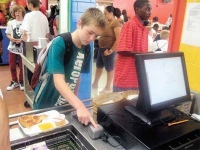 One in three secondary schools is forcing children to swipe their fingerprints just to register in class or take out library books, it has recently emerged in Great Britain, the most heavily video surveillance monitored nation on earth.

This represents just a further intrusion on basic rights and human liberty as the United Nations based agenda for global control and One World Government continues to be outworked in today’s world.

This New World Order claw is tightening its grip and strangling any sense of innocence, freedom and privacy our children should be entitled to, rather than experiencing this treatment dished out as though they are criminals, animals, or merchandise.

The United Nations’ insidious and evil invasion of education systems and curricula around the world extends beyond their sex education agenda (Omegatimes: The Continuing Attack on Our Children through Education Systems and the U.N.) and includes a direct level of control intended to destroy any sense of uniqueness, self worth, and resistance to concepts of injustice and totalitarian imposed authority.

The following contains excerpts of an article prepared by Laura Clark of the U.K’s Daily Mail:

Figures disclosed under the Freedom of Information Act show how 'Big Brother' technology is becoming widespread in schools. Thirty per cent of high schools are taking fingerprints simply to speed up basic administration such as borrowing books, registering in the mornings and buying canteen lunches.

Crackdown: One in three secondary students will be forced to submit an electronic fingerprint in order to carry out basic administration at school.  It means tens of thousands of pupils have had their prints taken at school.

In some cases, schools are taking fingerprints without first gaining parental consent.

The Mail revealed this year how pupils at a North London comprehensive were 'frogmarched' to be fingerprinted.  Capital City Academy provoked uproar after failing to first seek parents' permission.  It was later forced to apologise and wiped all prints it obtained before asking for consent.  Education Secretary Michael Gove has pledged to ban schools from fingerprinting pupils unless they have first obtained explicit parental permission. Campaigners warned yesterday that taking fingerprints for 'trivial' reasons risked invading children's privacy. Alex Deane, director of campaign group Big Brother Watch, said: 'The use of fingerprinting in schools is disproportionate and intrusive - in some cases, parents aren't even asked whether they agree with it. Schools are not equipped to hold this sort of unique and personal data. By taking it for trivial purposes schools are jeopardising the privacy of the students for the rest of their lives.'

Responses given by 27 councils under Freedom of Information legislation show that 111 secondaries are using fingerprint technology.  Meanwhile 84 primaries were also found to be using fingerprint technology.  Other councils were unable to provide figures, claiming schools were under no obligation to notify them of systems used.  But replicating the received responses across the country's 150 local education authorities reveals that 30 per cent are likely to use fingerprint systems nationally.

In some areas, the figure is far higher.  The students will be scanned using new biometric technology.

The (pre-election) Coalition has criticised current rules which state heads do not currently have to gain parental consent before implementing the systems.

The Information Commissioner's Office states: 'There is nothing explicit in the Data Protection Act to require schools to seek consent from all parents before implementing a fingerprinting application. However, unless schools can be certain that all children understand the implications of giving their fingerprints, they must fully involve parents in order to ensure that the information is obtained fairly.'

But critics claim the vague wording allows civil liberties to be abused.  Hank Roberts, an executive member of the Association of Teachers and Lecturers, said: 'It's outrageous that children's fingerprints can be taken without parents' consent. I think it's completely and fundamentally wrong.'

Schools insist biometric systems are not a concern because they do not store children's actual fingerprints. The finger scan machines create a mathematical algorithm which cannot be converted back into an image of a fingerprint.  Research earlier this year uncovered a growing trend for schools to use CCTV cameras to monitor children's behaviour as well as biometric administration systems using iris or face recognition.

Children are being monitored as closely as inmates in prisons by scores of covert cameras, according to research by Dr Emmeline Taylor, of Salford University.

The vast majority of secondary schools use more than 20 CCTV cameras to capture children's movements in corridors, playgrounds and even the toilets.

But many are breaking the law by failing to make it clear to pupils where cameras are located and how the images might be used.  At least one unnamed school had installed cameras with microphones in classrooms and corridors and given staff earpieces to listen in on conversations.