You are here: Home / Media / “Splice” A new movie about genetic engineering 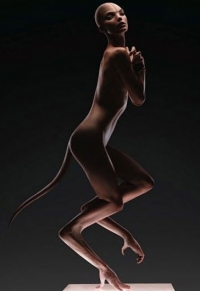 'Omegatimes' is profiling this film ... not to endorse it in any way ... but to bring readers' awareness to two important aspects to a growing Hollywood driven genre.  These two aspects are the systematic preparation of, and the desensitization of the masses to the 'clear and present' reality of Genetic Engineering, Political Control, NWO and Antichrist rule, 'alien visitation' and the return of the 'Nephelium'.

The movie, according to recent reviews, is typically brilliant technically re: special effects, and explicit and distasteful regarding content.

In the US ... Rated "R" - Under 17 ... Requires an accompanying parent or adult guardian. Disturbing elements including strong sexuality, nudity, sci-fi violence and language.

Superstar genetic engineers Clive Nicoli (Adrien Brody) and Elsa Kast (Sarah Polley) achieve fame by successfully splicing together the DNA of different animals, to create incredible new hybrid animals. Now they want to use human DNA in a hybrid that could revolutionize science and medicine.

But when the pharmaceutical company that funds their research forbids it, Clive and Elsa secretly conduct their own experiments in the pursuit of even greater scientific discovery. They secretly blend human DNA with their creations, ignoring their society's ethical and legal boundaries.

The scientists name their creature Dren ('nerd' spelled backwards), and though at first Dren exceeds their wildest dreams, she begins to grow and learn at an accelerated rate—and threatens to become their worst nightmare. The two must come to terms with their decision as their creature quickly develops into a deadly, winged humanoid monster.