You are here: Home / Disasters / We Stand on the Cusp of Global Disaster

We Stand on the Cusp of Global Disaster 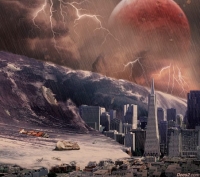 On this day, the 21st June 2010, the midyear solstice, and just exactly two and a half years out from 21st December 2012, we continue to try to understand, and struggle to conceptualize the apocalyptic scale and extent of the disaster unfolding in the Gulf of Mexico at this time.

A disaster unstoppable and uncontainable!

unstoppable - as the full expression of 'Nature' reacts and responds with violent force to man's depraved meddling, and uncontainable - as the impact is not limited by defined geography ... but 'out of the bag' as the world's great ocean currents carry the poison released from beneath the abyss to the fartherest coastlines of the globe.

This is not one of those tragic stirrings of 'Nature' oblivious to consequences, such as has happened down through the eons of time, like a sleeping giant rolling over and squashing an insect.  But instead, this is a 'man engendered calamity', like the mindless and suicidal provoking of that ogre by a pestering insect, which receives, in reaction, the full swipe of wrath, and is mercilessly slapped.

I am reminded by what is says in Hosea 8:7 ...and believe it has prophetic relevance to the events in the Gulf ... ... For they have sown
the wind,
and they shall reap
the whirlwind:

The following features excerpts from an article by Sorcha Faal

The United States President, Barack Obama, acknowledged the gravity of this apocalypse when in addressing his people this past week ended with words evoking the power of the gods to save his country, and as we can read:

“The oil spill is not the last crisis America will face. This nation has known hard times before and we will surely know them again. What sees us through – what has always seen us through – is our strength, our resilience, and our unyielding faith that something better awaits us if we summon the courage to reach for it. Tonight, we pray for that courage. We pray for the people of the Gulf. And we pray that a hand may guide us through the storm towards a brighter day.”

Obama’s asking for the “the hand” that could “guide” the American people “towards a brighter day” more than anything else sums up the catastrophic situation our whole World now finds itself in, and the Green Comet of Doom had warned about, in that unlike any other tragedy to befall us this one has the power to destroy for all time life as we know it.

To fully understand this one has to realize what oil is, and what it isn’t.

From earliest childhood students are taught that oil comes from the decaying of ancient biomass (dead dinosaurs, plants, etc.), this is known as “theory of biological petroleum origin” , and fits with the Darwinian 'Theory of Evolution'

Standing opposed to the biological theory of petroleum is what is called the abiogenic petroleum hypothesis that says petroleum was formed from deep carbon deposits, perhaps dating to the formation of the Earth (not inconsistent with 'Creation Theory' or 'Intelligent Design Theory'). The presence of methane on Saturn's moon Titan is cited as evidence supporting the formation of hydrocarbons without biology.

Simply put, one theory (biological) states that oil as a byproduct of biomass decay can only be found at depths not exceeding 5,000 feet as any lower depths would bring drilling rigs into direct confrontation will our Earth’s geothermal forces that are still not fully understood.  The other theory (abiogenic) states that oil is a byproduct of our Earth’s inner geothermal forces and all existing (but soon running out) wells were vast underground caverns where it had seeped into over millions of years from tens, if not hundreds of thousands of feet below the surface of our Planet.

During the 20th Century, Soviet scientists were the main proponents of the abiogenic theory of oil and in December, 1962 released a report titled “Contemplated Super-Deep Drilling in The Soviet Union” that served as the blueprint for drilling what are called “deep wells”.  The first of these “deep wells” to be drilled by the Soviets was fraught with such disastrous consequences due to the internal pressures of our Earth that on September 30, 1966 they had to seal it using an atomic bomb 1.5 times the strength of the Hiroshima bomb and at a depth of 1.5 kilometers. In April, 2010, the Deepwater Horizon, sitting 5,000 feet above the seafloor of the Gulf of Mexico, drilled to a depth of 18,000 feet (5,486 meters) when by all accounts it was hit with a massive pressure blowback estimated to be over 100,000 pounds per square inch (psi) that shot a column of methane gas and oil up the drilled well with such force it destroyed this aircraft carrier size drilling rig along with blowing out all the well casing making relief wells useless and unleashing a catastrophe of such proportions it now endangers our entire World.

Important to note about the 100,000 psi number is that current engineering technology cannot contain gas that is pressurized that high.  Even worse is that the enormous pressure coming from deep within our Earth is from what is estimated to be a massive 15 to 20 mile toxic and explosive bubble of methane gas trapped for eons under the Gulf of Mexico sea floor that should it shatter would kill millions.

So potentially catastrophic is this situation
it has led Texas A&M University oceanographer
John Kessler to not only state that
“this is the most vigorous methane
eruption in modern human history”,
it could also to turn the entire Gulf of Mexico
into a what he calls a “dead zone”.

As to what is turning the United States worst environmental disaster in history into a catastrophe of truly Biblical proportions is the fracturing of the Gulf of Mexico seafloor that we had previously reported on in our June 10th report “Scientists Warn Gulf Of Mexico Sea Floor Fractured “Beyond Repair” and was further confirmed by BP three days ago in their grudgingly acknowledging that their crippled blowout preventer is indeed leaning and could fall over.

Should BP’s blowout preventer indeed fall over the estimated 4.2 million gallons of oil currently flowing into the Gulf of Mexico could easily rise to over 50 million gallons a day in the worst case scenario envisioned by scientists as a volcano like eruption of the seafloor spews continuously, and “there is no stopping it”. Though not reported to the American people by their propaganda media, Obama knew within 3 hours of the Deepwater Horizon’s explosion the full extent of this tragedy as US Coast Guard documents clearly show their estimates of oil leaking into the Gulf of Mexico to be between 64,000 and 110,000 barrels of oil a day. The American people were told it was not over 5,000.

Even worse, right from the beginning
of  this disaster Obama has
refused all help offered
to the United States from the Netherlands,
Norway, Russia and a dozen other countries
around the World and has
refused to even consider the “nuclear option”
used by the Soviets to stop these types of
leak disasters leading one to ask “why”?

In our June 16th report titled “Obama To Earn Nearly $85 Million From Gulf Oil Disaster” we directed you to some possible answers to this question of “why” in pointing out the billions of dollars being made by so many of America’s elite because of this catastrophe, but US propaganda media sources still refuse to tell these truths to their people.

For those like us who write about these things (and we become fewer by the day) we are met with much ridicule and derision, at the best and unspeakable attacks, at the worst. But as the signs and our most ancient history clearly show, those who fail to listen now will perish, they always have. On the other hand, those who “see without their eyes” and “hear without their ears” will not only survive they will rebuild what is left when these “end of days” are over.

Be warned though! This time of the
“End of days” has just begun and there
are more trials and tribulations to come,
so start preparing for it now,
tomorrow will be much too late!