You are here: Home / Antichrist / By Brian Hay: The Spirit of Goebbels … Alive And Well, And Deluding Us Today

Brian Hay: The Spirit of Goebbels ... Alive and Well, and Deluding us Today 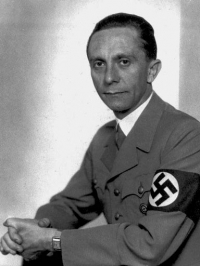 "The lie can be maintained only for such time as the State can shield the people from the political, economic and/or military consequences of the lie.

It thus becomes vitally important for the State to use all of its powers to repress dissent, for the truth is the mortal enemy of the lie, and thus by extension, the truth becomes the greatest enemy of the state."

Why did the Queen of England ever agree to relinquish ‘Her Sovereignty’ over ‘Her Nation and Empire’ and yield it up to the historical and political enemy of England? 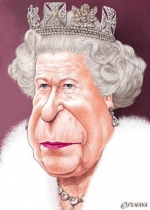 There are only two main reasons:

It is this second scenario to which I believe she was not only a willing party but even more so a major influence and architect concerning the whole process.

It is interesting to learn that when requested by certain authorities to either confirm or deny certain allegations being leveled at Princess Diana’s butler, at the time he was summoned to court, the Queen made some very pertinent, alarming, and even to some degree sinister statements. One being,

“There are forces out there of which
the average man knows nothing.”

She obviously was alluding to powers and plans afoot in circles beyond the influence or ears of most, but clearly manipulative and unbridled globally, of which she was acutely aware and involved. Most folk have very short memories, and as such are unaware of the long term objectives of men whose intentions, universally, are anything but honourable and equitable … such as Helmut Kohl who declared with great confidence

“When we build the House of Europe
IT WILL BE GERMAN”

The Bilderburger Group (top European neopolitical bankers, politicians and the entire socialist establishment), mostly German and many Jewish (Ashkenazi Jewish) carry their self imposed title of ...

MASTERS OF THE UNIVERSE

They have been planning and working since the Napoleonic wars to unite firstly Europe, and then the world under a totalitarian dictatorship over which they intend to enforce the eradication of 80 per cent of the world’s population.

That is made blatantly clear under the United Nations conventions of Agenda 21. You will know it under the sanitized term of GLOBAL SUSTAINABILITY.

It is also announced very clearly on the diabolic Georgia Guide Stones monument in Georgia, USA, where it declares very openly and intentionally that the world population is to be reduced to a sustainable level of a maximum five hundred million people. It even goes so far as to announce that each of us human individuals must sacrifice and choose as to whether we are worth our existence and valuable enough for earths future society by instructing that we BE NOT A CANCER ON THE EARTH, MAKE ROOM FOR NATURE (actual monument's inscribed words).

What do you think the US and Canadian Nazi Planned parenthood organization is all about?

It was initiated and inspired by The Sanger Institute under the influence of Margaret Sanger who was a Nazi and was close to Hitler in World War II, as well as a personal associate of Hitler’s occultic psychologist and highly modern esteemed authority of today Carl Jung. “A nation can abide it’s fools and even the ambitious, but it can not survive treason from within.

An enemy at the gates is less formidable, for he is known and he carries banners openly.

But the traitor moves within the gates freely, his sly whispers rustling through all the alleys, heard in the very halls of government itself.

For the traitor appears no traitor, he speaks in accents familiar to his victims, and he wears their face and their garments, he appeals to the baseness that lies deep in the hearts of all men.

He rots the soul of a nation, he works secretly and unknown in the night to undermine the pillars of a city; He infects the body politic so that it can no longer resist. A murderer is less to be feared”.

I am destitute for words at what I see has happened to our civilized western nations, we who have been blessed with so much graced by the very hand of God and endowed latterly with such a culture of decency and benevolence devoid of barbarism and vengeance, whereby we have endeavored to take a role of care and advocacy to the rest of the world.

But all that has now gone sacrificed on an altar of greed and power enabling the rich and proud not to mention arrogant to amass total global control over the innocent and helpless. And pray tell me ‘how’ and ‘when’ did this happen? The ‘when’ is easy to answer.  This has been going on for years under the guise of the Rhodes International One World Leadership tutoring Scholarships’ and George Bernard Shaw’s Fabian Socialist doctrine of GRADUALISM (meaning by the process of gradual normality we can be convinced of acceptability).

Note: the ambiguous and intellectual choice of their words.  Why is that? … simply to confuse the unenlightened of their deviousness and diabolic intent.

Why do you think it is that most of the poorer sector of society is now struggling to keep abreast of any sort of decent education?

Why also do you think it is that the general population has continually been subjected to a process of psychological dumbing down?  It was and still is the German Nazi plan of taking control of the world’s destiny and creating a superior Aryan race of Germanic people, wiser and more powerfully cunning than the rest, who will then rule over the useless, as they deem us to be, allowing them the privilege to decide who lives and who doesn’t in their future utopia.

You may think I am way out in my assessment, but let me tell you I am absolutely right on.  My fear and frustration is not directed at the megalomaniacs orchestrating this madness but the blindness and apathy of the populace they are doing it to, who will not wake up till it is too late. The Bible warns us over and over again of the conditions prevailing upon earth at the end of time, and even how the so called people of God would rationalize the prophecies pertaining to the apocalypse in order to accommodate their own hellish greed and insensitivity to the needs of others under the justification of Prosperity Preaching.

We have sold the soul of Christianity and the heart of the church to the dictates of a gospel of self indulgence and impurity, and in the process we have corrupted the truth to present it as a lie.

In the process we have not realized that we have become coinage and trade in the very bank of demonic evil, betraying the very one that gave Himself without consideration of cost ... for us. ‘For what’ I ask? Do we consider ourselves worthy of His sacrifice?  I think not. How God must grieve as He looks at us from above, seeing us sell ourselves like harlots to a world system and politic that He warned us to not be a part of, even though we are immersed in it.

As I said earlier, the ‘when’ is more easily answered than the ‘how’ in regard to the question how did this happen. But let me attempt to answer that question with a number of comments.

Hitler’s words say it all tell a lie often enough and the people will believe it. Our political minders have mastered the process and been trained in the art to perfection.

I have always had an interest in politics from a Biblical perspective and have noticed a repeated trend happening all too often now. It is a military term used also in legal terms but not one you would expect to hear in elected representative circles, it is what is known as neither confirming nor denying. In other word it means evade the truth at all costs, and all our politicians around the world are proficient at it ... they evade the truth.

I once listened to a news interview with the then leader of the opposition Brendon Nelson as well as one with Judy Spence a few days later not to mention many others. Their tack was to answer a question with a question and avoid answering it. The interviewer spent fruitless time and effort and ended up in absolute frustration because they kept just repeating the same mindless rhetoric we will not introduce a bill that does not include certain issues such as has been presented.

Exasperated the interviewer got angry and asked over and over again "I AM NOT ASKING WHAT YOU WOULD NOT DO I AM ASKING WHAT WILL YOU DO". He finally gave up on them. I came away realising these people know they have an agenda which must not be revealed at all costs till they are assured of the head count they need to get their agenda across. ‘Democracy’ they call it … SECRECY OF THE ELITE, more like it. It is no wonder 'democracy' is what Aristotle once said as 'the state of people preceding dictatorship and totalitarianism'.

Sadly, though, is the fact that neither pastors nor congregations, civilian nor official, whether passive or outspoken, will rise up and deal with what ultimately will be our downfall.

We are lambs for the slaughter, cattle or cannon fodder as one arrogant American political New Worlder called us.

Even Hitler knew the power of persuasion and the effect of people’s fear of challenging it.  He once said “How fortunate for us that the people we administer do not think or question”.  And again ... "The victor will never be asked if he told the truth" (Adolph Hitler)