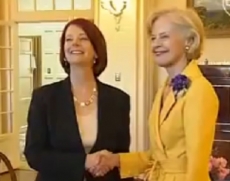 Prime Minister Julia Gillard has been charged with Acts of Treason before the Courts of Australia. This is being concealed by the Governor General Quentin Bryce, the Judiciary and the Press ... who are also implicated in the treason. Brian Shaw, who has laid these charges, provides the following update.

The following Statement was released by Brian Shaw on 20th July 2010:

Documents from the Australian Electoral Commission state that the disqualification of the Commonwealth of Australia renders a person incapable of being chosen or of sitting as a member of either House.  The disqualifications operate from the time the process of election starts, that process includes Nomination of Candidates.

In the period 15th December 2006 – 29th January 2007, 40 individuals were charged by Private Prosecution Right at the Melbourne Magistrates Court in Melbourne Victoria, inclusive of Julia Gillard

The Chief Magistrate Ian Gray stated in the Court on 15th December 2006:-

“You will not be relying on the Constitution in my court”.

In the Rudd / Gillard Government and Parliament, both houses, Senate and House of Representatives, have sat unlawfully during the entire term, because of the unlawful removal of the Crown of the United Kingdom from Western Australia.

The following key facts have been uncovered:

“The disqualification in Section 44 renders a person incapable of being chosen or of sitting as a member of either house.  The disqualifications therefore operate from the time the process of election starts that process, including Nomination of Candidates”

For more specific information relating to these criminal offences and the concealment of the existence of these offences, please refer to www.elijahschallenge.net 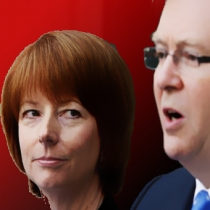 Julia Gillard knifes Kevin Rudd in the back to take his job as Prime Minister. What has been concealed is that Ms Gillard has been charged before the courts of Australia for the crime of  'Treason' ... an indictable offence which must be trialled before a Grand Jury.  This has been suppressed by the Judiciary and the Press, who are therefore also liable for 'Treason'.

How could this be?  What is the background to this amazing situation?

The following indepth article is based on the case prepared by the plaintiff in this charge, a Mr Brian Shaw of Werrribee, Victoria, Australia.

This article was in the process of being prepared for publication in Omegatimes when the extraordinary events that have taken place in Australia today began to unfold.

Before I go into the background regarding the charge and summons of the Act of Treason that has been brought against Julia Gillard, and others in the political and judicial fraternity in Australia, I want to provide an illustration that places what has happened into a Biblical context. There is an abject and urgent need for The People ... namely God's People to come down from the hills, and emerge from the caves and exchange "TRUCE" for "TRUTH"!

In Scripture (1 Kings 1:5-) there is one who seeks to claim the throne (Adonijah) without mandate (David's endorsement)

Adonijah is supported in this illegitimate initiative by Joab (Authorities) and Abiathar (The Church) ... who were also guilty of Treason - by association.

It required the rising up of the upholders of Truth and Law to overthrow the imposter and establish the legitimate successor to the Throne, (Solomon) endorsed by David, initiated by Bathsheba.

These true believers - Zadok, Benaiah, Nathan, Shimei, Rei and the 'Mighty Men' represent those authorities and The Church who are loyal and true, and who are not prepared to take a luke-warm compromised position of indifference.

Julia Gillard is charged with TREASON. This is not about her betrayal of Kevin Rudd, or her gender, or even her personal political ideology.  She is, indeed, a very gifted and skillful politician, amiable, articulate and outwardly gracious.

This is about her BETRAYAL to the CROWN, The CONSTITUTION, and the PEOPLE OF AUSTRALIA, and its also about the betrayal by those who endorse her, and the BETRAYAL OF THOSE WHO REMAIN SILENT.

The emperor is wearing no clothes,
and nobody has the guts to say so.

The church that remains silent at this time
IS ALSO CHARGABLE WITH TREASON!

The NWO and One World Government is behind what is happening ... and this places these events into an 'End Times' context. The following is the basis of Brian Shaw's charges against Ms Julia Gillard et al, with supporting information and documentation.

Section 44 of the Constitution sets out restrictions on who can be a candidate for Federal parliament.  In full it reads:

(ii.) Is attainted of treason, or has been convicted and is under sentence, or subject to be sentenced, for any offence punishable under the law of the Commonwealth or of a State by imprisonment for one year or longer: or

(iii.) Is an undischarged bankrupt or insolvent: or

(iv.) Holds any office of profit under the Crown, or any pension payable during the pleasure of the Crown out of any f the revenues of the Commonwealth: or

(v.) Has any direct or indirect pecuniary interest in any agreement with the Public Service of the Commonwealth otherwise than as a member and in common with the other members of an incorporated company consisting of more than twenty-five persons: Why has Julia Gillard and others been charged for committing Treason

How can this happen?

If you think this cannot happen, that will be the biggest error you will make ... because it has already happened!

After the referendum decision of November 1999, the people working to bring Australia and all Australians into 'Their law' began to change law in Parliaments, Courts, Judgements and structure, to capture Australians in a situation that they could not alter.

The law that is being substituted is coming out of the United Nations and is being silently placed into position using every Masonic position within Australia assisted by the Trade Unions.

If Julia Gillard - Prime Minister appointee from today - and others are allowed to continue to substitute the established Law with another Law, without the knowledge or consent of Australians, then the nation will awaken to another Law that is out of their control ... A new, illigitemate Constitution spawned in the recesses of the United Nations

Five principal substitutions will be: