Not only is the right to express an opinion and the right to access information /news/opinions on the internet under attack but Christianity itself; the basics of its beliefs are threatened.

The criminalizing of Christian speech or opinion is under attack most noticeably in the media but also increasingly through legislation and the judiciary around the world.

In May this year Rev. Franklin Graham (son of Dr. Billy Graham) warned that the American right to freedom of religion was being eroded every day. He was supposed to be the honorary chairman and guest speaker at the National Day of Prayer but a month out from the event the Army ‘disinvited’ him because of statements he had made about Islam. 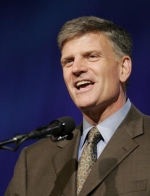 His only crime was to not compromise his message and to assert that:

“Jesus is … the way, the truth
and the life and no one comes
to the Father but through Him”

He has also warned Christians that the onslaught of secularism will see the loss of the freedom to preach outside the church and implementation of laws making preaching acceptable only within certain places (reminiscent of the restrictions on Christians in communist countries).

The National Day of Prayer dates back to 1952 when a unanimous Congress implemented this event and it was signed into law by President Truman. Since then antichristian activists have multiplied and become very vocal with their opinions and are aiming to remove all traces of Christianity from the US military. They are being aided by the Judiciary in America. Recently a District Court Judge in Wisconsin ruled that the National Day of Prayer was unconstitutional because it violates the first Amendment prohibition against the establishment of a religion by the Federal Government.

The ruling stemmed from a lawsuit filed in 2008 by a group of atheists and agnostics. The Justice Department has said they will appeal the ruling.

More disquieting than this is the June 28 2010 ruling by the Supreme Court requiring Christian Campus groups on public Universities to accept gay students as members and leaders (even though their beliefs and lifestyles contradict the inherent beliefs of the group). It is the first time that gender rights supercede religious rights.

The ruling also means that groups such
as the Christian Legal Society
must allow atheists to lead its bible studies!

How ridiculous is this?

Let us hope that these Christian groups
will rise up and appeal this stupid ruling. In addition there is a subtle change in language used by President Obama and Hilary Clinton on this topic. More and more this year Obama will talk about ‘freedom of worship’ rather than ‘freedom of religion’.

Does this matter? Yes … because language defines freedoms and limits. Freedom to worship refers to the right to pray, praise and express belief within the confines of a place of worship or privately.

We are living in days where the act of preaching is now a potential criminal offence. Some examples are given for Australia, the United Kingdom and the United States. These only scratch the surface of what is occurring and the type of situations that pastors and evangelists face. In Australia two evangelical pastors were prosecuted under Victoria’s racial vilification laws in 2002.

It was triggered by a complaint by the Islamic Council of Victoria and the judge upheld the complaint but it was later overturned on appeal.

Laws such as the Public Order Act or Hate Speech can become very convenient methods of criminalizing Christian speech. In the United Kingdom in April 2010 Dale Mcalpine, a street preacher in Cumbria was arrested after he answered a question from a passerby and stated the biblical view that homosexuality is a sin.  He was detained for 7 hours and charged with causing harassment. The case was later dropped after being assessed by the Crown Prosecutor. Mr. Mcapline is looking at options for suing the police for wrongful arrest and hoping to bring to the attention of people the loss of freedoms that are occurring.

American street preacher Shawn Holes was another who was arrested for saying homosexuality is a sin.This occurred in March 2010 in Glasgow.

Unfortunately because of family circumstances and the need to return to the US quickly he decided to accept the charge and was fined $1500, even though those around him said he had a good chance of fighting and defeating the charge. The campaign against expressing Christian opinion is led predominantly by the media. In New Zealand the mainstream media is overtly antichristian, particularly television. It has been noticeable for many years now that reporting of any news stories which portray Christianity in a bad light will feature prominently but on the other hand any positive ‘good news’ stories receive minimal if any coverage.

For example one of the lead stories in the NZ Herald concerned a South Island Christian School that removed a coach from their staff as he was a homosexual. The Board of Trustees understandably felt there was a conflict with the schools core biblical beliefs but have been forced to apologize, pay reparations and attend a human rights awareness course. Author S.E. Cupp has had her book entitled “Losing Our Religion: The Liberal Media’s Attack On Christianity” published recently.

What is intriguing is that the author is a self proclaimed atheist. Her book gives an indepth inside look at the liberal media. Interviews and quotes openly document their bias against Christianity and their agenda to destroy it.

As restrictions close in, Christians in the so called 'Free Western World' need to wake up to the fact that persecution is not that far away.

Rights that we have taken for granted will continue to slip away unless voices are raised. Australians, for one nation, have an opportunity with the forthcoming election to ask some particularly penetrating questions of their candidates on topics such as internet censorship.

Those in other nations, such as USA, Canada, United Kingdom, New Zealand etc also need to raise the voice - and publically and seriously question Politicians and the Press on where they stand on issues such as Freedom of Speech and true Justice.