You are here: Home / Disasters / The Ongoing Tragedy of Haiti – One Year on after the Earthquake … Another United Nations Disaster?

The Ongoing Tragedy of Haiti - One Year on after the Earthquake ... Another United Nations Disaster? On January 12th 2010, just less than a year ago, a 7.0 magnitude earthquake struck the island of Haiti, near its capital Port-au-Prince. It is estimated that up to 300,000 people were killed and 1.5 million people became homeless.

The immense poverty of the country, the weak infrastructure and the poorly constructed buildings all contributed to the large death toll.  In contrast the intense earthquake that struck Christchurch, New Zealand recently, of equivalent power and destructive potential, brought about massive damage but incredibly ... nobody was killed. People all over the world saw the images of Haiti via media and internet and the plight of the Haitian people as a result of that earthquake.

Under the ongoing political control and disaster relief efforts there, overseen by the United Nations and the United States ...

... What has really
happened there since?

Millions of dollars were subsequently raised by aid agencies and governments pledged large amounts of funding for rebuilding infrastructure and meeting the desperate needs of the people there.

Some camps were created by non-government organizations but others were ‘self created’. One such ‘self created’ camp has been Camp Canaan located at the foot of Mon Cabrit. Around 8000 people are now living there - using blue tarps and cardboard as shelter. The tarps were provided by the Government of China.

The people here live in harsh conditions – it is hot and humid during the day and during the rainy season the water cascades down the mountain, flooding the camp. The people have little food or medicine. Some latrines were provided by an Irish charity and portable water by another group. Both NGO camps and other camps are usually in the middle of nowhere, with very few trees, poor soils and there is little opportunity for the people to work. The United Nations is universally hated in Haiti. This agency of One World Government has concentrated it's efforts over the years within the slum areas of Cite Soleil, where support for democratically elected leader Bertrand Aristide used to be strongest.

Aristide wanted to help the
poor, and dismantle the
traditional system of
exploitation by overseas
companies, and limit influence
by foreign governments.

Aristide was subsequently forced out of office by a coup d’état, financed by the White House in 2004 and exiled to South Africa.

(By the way ... this is typical of United States foreign policy on a global scale ... depose the the leadership or declare war on any country that does not agree to, and submit to the United States. "Wikileaks" is proof positive of this ... which is why the CIA is leading the charge to oppress this exposure of the truth behind the scenes on the world stage.)

Over the years a brutal campaign has resulted in many Haitians being killed, raped or indefinitely imprisoned by the UN occupation forces.

This has fostered the hatred of the UN, along with the suspicion that Nepalese UN forces are responsible for the Cholera outbreak.

The result has been that Haitian people are not able to count on or trust the United Nations for support after the earthquake, and negative attitude means they don’t even desire it. The following video clip documents one particular group of UN troops and their nefarious activities.

It is nearly one year on after the earthquake, at the time of this article, and the Haiti situation has faded from the world’s memory.  The assumption has been that the aid organizations and the words of high profile people such as Bill Clinton would have delivered on their promises.  But Haiti has once again returned to the news headlines with the devastating and deadly cholera outbreak.

The non partisan and nonprofit organization, labeled Disaster Accountability Project (DAP), formed in 2007 in the aftermath of the Hurricane Katrina relief debacle, has recently released an online petition targeting the leaders of major disaster relief aid organizations – charging them with failing to provide essential relief aid such as clean water and sanitation that would have prevented a cholera outbreak. Statistics indicate that of the total aid money raised only 27% has been spent  while 73% remains unspent – sitting in bank accounts.  The aid agencies named include:

One particular aid worker – Chuck McCone, Executive Director of Prizm Foundation, which is also a relief group trying to help in Haiti,  has started a hunger strike to bring to people’s attention the lack of action from these agencies to adequately address the needs of the Haitian people.

In addition the United States government pledged $1.15 billion in aid which was approved in the Senate in May and the House of Representatives in July ... but was subsequently stalled by US Republican Senator, Tom Coburn.

None of this pledged aid
has been given to date.

Desperation, starvation, poverty,
frustration and lack of security
are everyday realities for
at least one million people in Haiti. 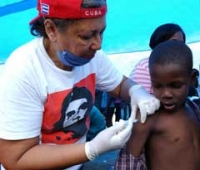 Surprisingly the unsung heroes of the Haiti situation are doctors from Cuba.

This Caribbean nation, somewhat despised in the eyes of the West for ideological and historical reasons, has been putting its doctors to work in Haiti since 1998 but they also assist in other countries around the world. Over 1200 hundred Cuban doctors are working all over Haiti. They have been at the forefront of the battle with the cholera outbreak, treating 40% of all cholera patients.

The other group also assisting in this field is Medicins Sans Frontiers. Health workers from other countries only stayed a short time (e.g. 2 months) but these two groups have committed to the long term treatment of the people in difficult conditions. The United States still has an embargo on pharmaceutical drugs with Cuba so the Cubans must source their medicines from elsewhere. Also the Cubans have trained 550 Haitian doctors for free and have 400 currently in training.

It is a sad indictment on the West and the wealthy nations of the world that the Haitian people still live without the basic necessities of life nearly 12 months after the disaster when the funding is available but there is not the will or compassion to apply it on the ground.

In fact ... the prevailing attitude of the west has been one of denial or abject indifference in a lot of ways ...  illustrated by a story that appeared in the UK Guardian that tells of a cruise ship visiting Haiti and passengers picnicking not far from the devastation, fenced off and protected with security forces, enjoying their "chilled Moet and smoked pheasant sandwiches" and totally oblivious to the destruction and depravation just beyond the fence line. Any comments to this article would be most appreciated ... Thank you