You are here: Home / Eugenics / The Vaccination Industry: Part 2 ~ The Gardasil Nightmare: The Attack On Teenagers! “Gardasil” ... manufactured by Merck ... was approved in the USA in 2006 by the FDA – The demonic "Handglove of Satan” ...  as a supposed 'tool' in the prevention of cervical cancer by targeting the Human Papilloma Virus (HPV). GlaxoSmithKline created a similar vaccine marketed under the name 'Cervarix'.

Gardasil was promoted as a wonder vaccine in the fight against cervical cancer. In the first nine months Merck recorded sales of $1.1 billion and Merck continues to be the world’s leading vaccine manufacturer. The vaccine schedule recommends three shots be given to all eleven and twelve year old girls.

However as experience has shown and information has come to light, what is promoted is not the wonder cureall at all. In fact it is quite the opposite ... such as with Jessica Varga (below) 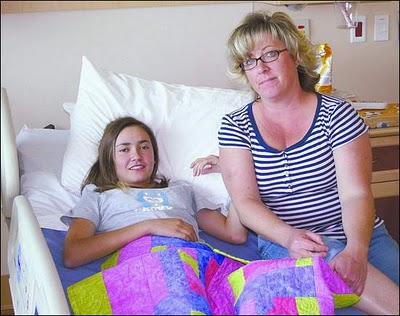 Jessica Varga of Nevada became paralyzed
hours after receiving a dose of Gardasil.

False and misleading information have been given with the intention of frightening parents into vaccinating their teenage daughters. Some important points to be aware of are set out following:

It is a viral infection that can lead to cancer in some people depending on certain factors such as lifestyle and other infections. Some people with HPV do not get cancer at all. Statistics show that within the first year 70% of infected people recover and 90% within two years naturally, without vaccination.

The vaccine is only designed to protect against two of the fifteen strains of HPV. The vaccine doesn’t work if you are already infected. However most alarmingly is that information from Merck’s own research states that if a person has already been exposed to HPV strain 16 or HPV strain 18 prior to receiving the injection, their risk of developing precancerous lesions increases by 45 percent. Also ... what is not mentioned is the fact that cervical cancer rates have fallen dramatically as a result of Pap smears becoming part of routine medical care for women.

Gardasil was fast tracked through the prelicensing stages using poor methodology. Clinical trials were deceptive and dishonest in terms of safety standards. Merck only studied 1200 girls under 16 years of age and tested their vaccine against a control group that was also administered an aluminium product.

A placebo is actually required to be an inert substance which the aluminium was not. The same side effects seen with the vaccine group were then also seen in the control group thereby justifying the vaccine as safe. The most serious health problems and deaths were written off as ‘coincidence!’

It was only after the high volume of reports of young girls fainting and having ‘non epileptic’ seizures after having the Gardasil vaccine that Merck had to change the listed side effects in their packaging and labeling from June 2009. Listed side effects are now recorded as fainting, dizziness, seizures and neurological events. Many girls have gone on to be diagnosed as having epilepsy e.g. 14 year old Katherine Kimzey experienced headaches, fainting and stiff joints after receiving the second shot of three and a few weeks later had a seizure and now suffers from epilepsy. One sixteen year old girl lost nearly all of her vision within ten days of receiving the second course of the vaccine. Eighteen months on, her sight has not recovered.

Product information from the manufacturers states that the vaccine ingredients include:

3. Adverse Reactions Can Cause Death

As at November 2010 a total of 20,575 adverse reactions have been reported to the Vaccine Adverse Events Reporting System (VAERS) in the USA, including at least 89 deaths. Side effects reported to VAERS include:

Symptoms and causes of death that have been reported after the vaccine has been administered include blood clots, acute respiratory failure, cardiac arrest and sudden death from unknown causes. Two mothers from North Carolina whose daughters were disabled as a result of the vaccination started a website called www.truthaboutgardasil.org to bring to parent’s attention the devastating effects of the vaccination and the true life stories of families affected.

More episodes of shock,
fainting and paralysis
have been reported after
Gardasil injections
than any other vaccine!!!

In Australia adverse events can be reported to Adverse Drug Reactions Advisory Committee (ADRAC). ADRAC believes that less than 10% of reactions are officially reported but up to June 2010 1534 adverse reactions had been reported in Australia.

In India Merck and GlaxoSmithKline have been involved with a two year clinical trial under the guise of a demonstration health project to vaccinate young girls with the HPV vaccine, beginning in July and August 2009. It was jointly sponsored by:

Thirty two thousand girls aged between 10 and 14 belonging to poor families were enrolled in the project. Many of them were living in boarding schools. Parents were either given false, misleading information on the safety or not informed at all.

Consent was only given verbally by the wardens of the schools - not the parents. Four girls died and at least one hundred and twenty girls suffered side effects such as stomach disorders, epilepsy, headaches and the early onset of menarche.

Finally in April 2010 India suspended the project and the Ministry of Health and Family Welfare admitted that it was a post license research study – designed to aid Merck in legitimatizing their product in the face of appalling damage in the USA and because their own prelicense results were a joke.

This state endorsed experiment violated existing ethical guidelines and child rights in the name of financial gain. Alarm bells should be ringing where the Gates Foundation is involved after Bill Gates speech to the TED 2010 Conference in California where he stated that through vaccines and other health initiatives world population could be lowered by 10% to 15%.

Also the Merck Fund and the Rockefeller Foundation (strong eugenicist organizations) have strong financial and administrative ties to the Merck pharmaceutical company.

5. Targeting of Girls in United Kingdom Without Parental Consent

A pilot programme aimed at raising Gardasil vaccination rates was launched in April 2010 in Birmingham, Britain and targeted girls aged sixteen to eighteen years. No parental consent was required and girls were given shopping vouchers if they complied.

Taxpayers money was used to bribe these girls.

Merck has been busily operating behind the scenes to get its vaccine mandated not only for all young girls but young boys as well. The Government of the United Kingdom has also been pushing for all twelve to eighteen year olds to be vaccinated despite strong opposition from parents and health watchdogs.

The Gardasil saga is an example of how big pharmaceutical companies (in this case Merck and GlaxoSmithKline) have seen an opening in the market for a new product, manufactured it and with government support fast tracked its licensing without independent strict safety tests. There is no conclusive evidence to date that Gardasil is effective. Instead large profits can be made at the expense of young people’s health, fertility and lives.

Barbara Loe Fisher is one of many who have posted information about this terrible vaccine and the Gardasil nightmare - refer Youtube Video Clip below.

Since this article was written the case of a New Zealand family has come to light. Their baby at six weeks was given the wrong immunization – he was given Gardasil instead of the standard immunization by mistake. Two years later this toddler has developed leukaemia and is undergoing intensive chemotherapy - as reported by The New Zealand Herald - Click Here.

The family, in search of answers which have not been forthcoming by the medical establishment – "surprise, surprise" have carried out their own research finding a link between Gardasil and ITP, a condition where blood is prevented from clotting, a symptom of leukaemia.

Despite this typical example of the lethal side effects of Gardisal, and vaccinations in general - the medical and scientific community still blindly and ignorantly embrace the "Vaccination Lie and Deception" exemplified even today by another article published in New Zealand - in which a leading New Zealand scientist, Sir Peter Gluckman, is reported as "lashing out at New Zealand's dismal childhood immunisation rates after a parliamentary Health Select Committee report has the country still languishing as one of the worst in the world." (Click here for the article)

If this is indeed the case - then New Zealand should be applauded, not admonished, for its world leadership in resisting the evil United Nations eugenics and vaccination agenda

The next article by Sharon Anderson on The Vaccination Industry will be "Part 3: The Swine Flu Saga and the Ongoing Flu Vaccine Deception"