You are here: Home / Eugenics / By Brian Hay: Eugenics and Population Control – Part 4

There are things that have been socially engineered and funded by the extremely wealthy elitist bankers and politicians without the knowledge of the unsuspecting public. The Bible makes it clear that Gods people and the citizens of any nation are destroyed by one simple strategy ...

... To withhold the necessary knowledge that can enlighten the masses

"My people are destroyed for lack of knowledge" ... Sadly we are told we are the most informed of any generation, that is incorrect. We may be the most indoctrinated generation but we are only informed to the degree that the keepers want us informed.

Take for instance the woman’s liberation movement of the 1960's and 1970's one of the most influential of all its activists was an American woman by the  name of Gloria Marie Steinem ... again you can see the religious link here. Her heritage is German and her religious background and philosophy was Ashkenazi Jewish. It is now common knowledge that she was a plant for the CIA who backed and financed her seditious activism in all the university campuses she was encouraged by them to go and establish her anti establishment anti Christian subversion. 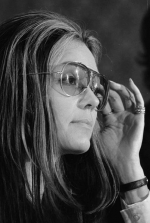 She like many others of her ilk were funded and financed by the US black budgets of C.I.A. covert programmes. This young and attractive lady was chosen either with her consent or without her actual knowledge of their hidden intent it does not matter they will subvert and use who ever. She was trained and sent into many of the major American universities, to begin to undermine the traditional views of what they and she determined was oppression and subjugation of the weaker sexes.

Steinem because of a disturbed home environment when a child saw the breakdown of her parents marriage which in turn created in her an aggressive attitude against social injustice in the home, health and educational system of America, to which she responded with vehement aggression and protest.

... Maybe with a degree of innocence on her part and not altogether blaming her Jewishness but her string pullers and controllers, certainly without question, have been German Cabalistic Secret Society Ashkenazi Jews.  They knew who to pick and support and knew what philosophical affiliation they could depend upon to abuse and manipulate. They are all freemasons of one sort or another, and have allegiance to left leaning agencies and covert clubs whose agenda is the same as the elite at the top.

All these provocateurs and subversives are all Talmudic cabalists although many will not realise it. Like freemasonry itself, whose support comes from so called Christian leaders and spokesmen of Christian doctrine. The only motive that can justify or explain this is to admit one of two things, either they are converts to the dark side themselves and have sold their souls to work evil or they are simply deceived and blinded to the devilish path down which they are being lead. No wonder Jesus so aptly declared to the Pharisees and lawyers of his day who were the predecessors of our lawyers and religious humanistic moralists, of today, “You are blind guides leading the blind and you will both end up falling in to the ditch”

An interesting side note, it is self evident that the evil sinister connotations of this word cabal originates from this Jewish word cabalist or Jewish Cabala. Steinem empowered the whole spirit of revolution and the feminist movement an uprising which gripped the entire world and produced many other men haters, whose drive was retribution against their individual injustices. Not entirely with out provocation, I might add, as many women had become just toys to the corrupt and insane sex crazed male user society. But the disappointing outcome was not a correction of this distorted male abuse of woman but an explosion of female reaction of rebellion and anarchy against it, which did not quench it but actually accentuated the division between sexes. This created a male back lash around the world and fired up the already established white slave and sex industries even further.

Once again the unsuspecting ignorant man in the street, just going about his daily business has no idea what has been going on by the puppet string pullers of our political leaders. For during the second world war and even before it, as Hitler was being promoted to power in Europe, endorsed and financed by these same covert Jews of the financial houses of Europe yet another wicked seed of evil was being sown in tilled prepared fertile soil. It was the plan to take control of the unwanted masses of population resulting from their destruction of the family and morality of a Christian orientated society. You can not encourage unhindered, unfettered sexual liberty without having to consider the absolute explosion of its uncontrolled consequences. I am referring to the control of unwanted pregnancies and birth control by abortion.

We call it abortion but the sanitised name given to it by the power elite has always been “EUGENICS”. It is not new, forms of infanticide have been practiced for centuries, and it is interesting that in earlier and also ancient times, it was considered both an honour and a necessity to kill the children to sacrifice them, in order to pacify the mystical gods enthrone over nature. There is no difference today than times past we feed our own egotistical corrupt natures with self importance and self indulgence will the powerless and innocent are sacrificed on our personal altars of  what we deem necessity and expedience. Kill so others can live and it always seems to fall this way in our deviate interpretation kill the young or kill the old so we can enjoy unhindered pleasures. Kill the weak so the strong can build a better world, kill the handy capped and impaired so the able bodied are not constrained or inhibited from their intents. Kill the poor so they are not a drain on the rich, kill the female of the species so they can not reproduce. Simply kill all who do not fit the agenda. Just kill and remove all the useless eaters and in the world forum meetings and UN these sinister statements have frequently been made.

In the days of Biblical Israel, recorded in history Pharaoh killed all male children to quell his fear of a leader being born who would challenge his kingdom. In the days of Jesus, Herod killed all male children to prevent a king being born who would threaten his kingdom. In many historical battles and overthrow of ethnic nations the children and women have been killed and eradicated to remove any future potential nuisance and problems. Today is no different evil heart of man has not changed at all and Jesus said it if the Lord of heaven at the end of time does not personally intervene no human flesh would survive and persist upon earth. What an indictment upon fallen men and creation.

So here we are, in our so called civilised society, governed by legislation that is nothing short of insane, where we kill our offspring to promote our greed, and we try to put an ambulance at the bottom of the cliff rather than a fence at the top. In our ungrateful selfish and insatiable frenzy for pleasure and importance we resist having to deal with the very motives and morality which influence responsibility and so evade educating people in right and wrong to make them accountable. You see the only way you can deal with unrestricted self desire which contradicts self control is to remove the consequences of greed rather than its causes.

In the second world war Hitler was manipulated like the rest of the public, but not against his own distorted views totally, as he gave acquiescence to all that took place and had a passion for power too. He was schooled in the dark arts of Cabala by none other than the father of German Eugenics Joseph Mengele and before him, of all people our own modern psychoanalyst the esteemed prodigy touted by all as a genius, Carl Yung. Yet Jung was an illuminist a secret society member of the order of  Death the THULE SOCIETY. The modern sinister American branch is called the SKULL AND BONES SOCIETY out of Yale to which the Bush Family and many presidents belong.

Carl Jung was one of Hitler’s occultist tutors as he spent many years in an exclusive conclave linked to a Hindu sect known as the order of the swastika. It was Jung who introduced the Black Shirted SS with the monogram of the S inscribed like Z on the lapel of all the uniforms of the Gestapo. It represents the strike of a bolt of lightening as Satan falling from Heaven. Hitler had a belief that who ever held the sword of Antipas held the demonic power of Europe as Napoleon before him. The sword and spear of Antipas is the sword and spear of the soldier who pierced Jesus side and was on show in Austria and as soon as Hitler became Fuehrer he went straight to Austria and took the weapon as his good luck charm and authority to rule and conquer.