You are here: Home / Discovery / Dead Sea Scrolls confirm Jesus as the Messiah 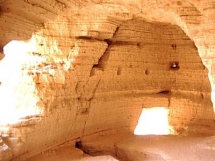 The Dead Sea Scrolls are the greatest archeological find in history. So many people wanted them to be kept secret from society because it would confirm that the multi millenium prophecies of the Messiah, the Savior, the Christ was in fact fulfilled by Jesus of Nazareth.

The Jews didn't want them discovered because it would make them feel like fools because they didn't realize He was the Messiah and led Him to be killed by the Roman governor Pontius Pilate. Satan sure as hell didn't want them revealed, because all the atheists, Muslims, and believers in other false doctrines in the world, would be exposed and lose revenue in their corporate like greed. Scientology, which is so whacked out, would make their followers like Tom Cruise and John Travolta and the whole Hollywood scene lose further face and dollars.

What the Dead Sea Scrolls reveal is that they have been dated between 100 B.C. (Before Christ) and 300 B.C. and they contain complete books or fragments of all the books of the Jewish/Christian/Muslim Old Testament except for the book of Esther. [Esther is the only book that doesn't mention the God; however, it implies the incredible hand of God.]

To read the rest of the article "Wikileaks Dead Sea Scrolls" ... click here