You are here: Home / Science / Aborted Fetal Content in Every Day Products The following every day products, listed below, which are marketed for human consumption or use (and presumably approved by the 'FDA') include aborted human fetal content.  On the other hand the FDA - Monsanto consortium considers people who plant vege gardens and grow their own food as seditious and anti-establishment.

Therefore the US government has been considering Bill HR 875 ... in attempt to 'outlaw' organic farming. Many small farmers and organic food activists are claiming that if H.R. 875 is passed, it will mean the end of organic farming in the United States. H.R. 875 was introduced by Democrat Rosa DeLauro in February 2009. Her introduction of this bill represents a stunning conflict of interest, because her husband, Stanley Greenburg, works for Monsanto. Monsanto is the world's biggest producer of herbicides and genetically engineered seeds, and they would GREATLY benefit if thousands of small organic farmers were put out of business, because organic farmers don't use Monsanto products.  H.R. 875 is called the Food Safety Modernization Act of 2009 and you can find the full text of the bill on the following link: http://www.govtrack.us/congress/billtext.xpd?bill=h111-875

As stated above, and in total contrast to the threatened free choice to grow your own food - the FDA-Monsanto Consortium, in league with the other ogres of big business, are looking to force down our throats, with no choice in the matter, chemically processed food and and other garbage that includes (amongst other unmentional additives) ABORTED HUMAN FETAL TISSUE!

Following is a list of some of the products that contain this aborted fetal material, as reported on the Children of God for Life website and which are 'marked for boycott':

Pepsi Beverages on the Boycott 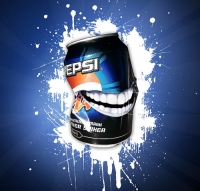 At this time we are formally boycotting PepsiCo products, however many have asked us for lists of the other companies involved with Senomyx and what products are involved. Unless we know a certain product or brand name specifically, we intend to boycott all of the company’s products.

Not part of Senomyx - Neocutis Products

This company produces anti wrinkle creams that contain cells from a 14 week gestation aborted male baby. Following is the list of the creams, but we recommend a full boycott of all Neocutis Products.