You are here: Home / Science / Dreams Read by Brain Scanner for the First Time

Dreams Read by Brain Scanner for the First Time The secret world of dreams could soon be cracked open. Innovative neuroscientists have already begun to figure out the thoughts of awake people – now, a team reckon they can use similar methods to tap into dreams.

To find out whether dreams could be read in the same way as waking thoughts, Michael Czisch and Martin Dresler at the Max Planck Institute of Psychiatry in Munich, Germany, and their colleagues turned an array of brain-monitoring technology on lucid dreamers.

"A lucid dream is simply a dream in which you realise you're dreaming," says Dresler. The rare ability to "wake up" while still in a dream and be in control of their actions – and their dreams – makes lucid dreamers a real asset to dream researchers: they are the only people who can reliably, and in real time, communicate what they are dreaming about – usually with eye movements.

After tracking down six individuals who claimed to be able to have lucid dreams almost nightly, the team used both functional MRI scanning and near-infrared spectroscopy to observe each person's brain activity as they clenched a hand while awake. They then compared this with the activity associated with imagining clenching the same hand, and clenching the hand in a lucid dream.

Unsurprisingly, it was not straightforward to know when the volunteers were dreaming that they were clenching a hand. The group used a combination of monitoring methods collectively known as polysomnography to check whether the participants were in the rapid eye movement (REM) state of sleep, in which we tend to have most of our dreams. This involved measuring brain activity, tracking eye movements and monitoring the chin muscles, which are paralysed during REM sleep. 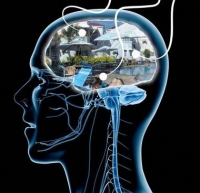 At the same time, the team monitored the brain activity of the dreamers using functional MRI scanning or near-infrared spectroscopy by turns. Both techniques show which areas of the brain are active by measuring oxygenated blood.

To let the researchers know when they had entered a lucid dream and were intentionally clenching a hand in the dream, each participant was instructed to move their eyes from left to right an agreed number of times. Even when dreaming that they were clenching their hand, the lucid dreamers did not clench their hand in reality.

The experiment still proved difficult. "The participants have to fall asleep in a scanner, reach REM sleep and enter a lucid dream stable enough for data acquisition," says Czisch. As a result, the team only managed to fully investigate two dreams experienced by different dreamers.

In both cases, the team were able to spot dreaming brain activity associated with hand clenching, which proved to be very similar to that seen when imagining hand-clenching.

Real hand-clenching showed a like style of activity, but with a greater area of activation.  "This is a proof-of-concept study, and provides the first evidence that it may be possible to use brain imaging to read the contents of a person's dream," says Czisch.

Daniel Erlacher at the University of Bern in Switzerland, who describes the study as "a brilliant piece of work", agrees. "If you can get a detailed reading of brain functions and know what each represents, you can read dreams."