You are here: Home / Finance / FINANCIAL TYRANNY: The True Scale of US Debt … in Trillions of Dollars

FINANCIAL TYRANNY: The True Scale of US Debt ... in Trillions of Dollars 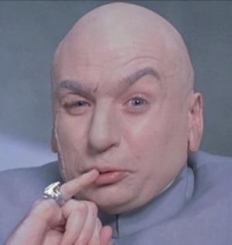 There are agents of treason and extortion out there far worse than the notorious "Dr Evil!"

The article following (author unknown) provides a graphic comparison of what dollar amounts look like in real terms - not just figures followed by a series of 'zeros' on a piece of paper or a computer screen.

Note that this is in 'US' dollars and represents the degree of debt that Kenyan born US President Barack Obama and others have plunged the United States into ... with the committment to take that debt even further with Obama's current 'budget' proposals.

$100 - Most counterfeited money denomination in the world. This keeps the world moving.

$10,000 - Enough for a great vacation or to buy a used car. Approximately one year of work for the average human on earth. When the U.S. government speaks about a $1.7 trillion deficit - this is the volumes of cash the U.S. Government borrowed in 2010 to run itself.

Keep in mind it is double stacked pallets of $100 million dollars each, full of $100 dollar bills. You are going to need a lot of trucks to freight this around.

If you spent $1 million a day since Jesus was born, you would have not spent $1 trillion by now ... but $700 billion - same amount the banks got during bailout.

Say hello to the Boeing 747-400 transcontinental airliner that's hiding on the right.

This was, until recently, the biggest passenger plane in the world. In 2011 the National Debt exceeded 100% of GDP, and venture into the 100%+ debt-to-GDP ratio that the European PIIGS have (bankrupting nations). To the right you can see the pillar of cold hard $100 bills that dwarfs the pre 9/11 World Trade Center & Empire State Building - both at one point world's tallest buildings. If you look carefully you can see the Statue of Liberty.

The 114.5 Trillion dollar super-skyscraper is the amount of money the U.S. Government knows it does not have to fully fund:

It is the money USA knows it will not have to pay all its bills.

If you live in USA this is also your personal credit card bill; you as a US citizen are responsible for paying this back. The citizens of USA created the U.S. Government to serve them, this is what the U.S. Government has done while serving 'The People'.

The unfunded liability is calculated on current tax and funding inputs, and future demographic shifts in US Population.

Note: On the above 114.5T image the size of the base of the money pile is half a trillion, not $1T as on 15T image. The height is double. This was done to reflect the base of Empire State and WTC more closely.