You are here: Home / Church / “Betrayal”

“Betrayal” you ask!  What has that got to do with end time events? … to which I will respond … a much greater effect and impact than you can imagine, and it will get worse not better. Jesus warned us that as time draws to a close and the end of the age ventures nearer, men’s hearts will be so fearful and lacking in grace and spirit that they will seek their own safety rather than defend one another. 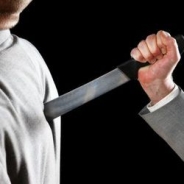 Jesus put it very plainly when He said “Because iniquity will increase and abound the love of many will wax cold they shall betray one another and will deliver one another up to death”. As a result of these future prevailing conditions these ‘ones’, guilty of the betrayal of one another, shall convince themselves they are actually doing God a service in delivering one another up to death.

One of the most difficult experiences one ever can confront in an entire lifetime is to have to deal with betrayal. It is a heart wrenching experience, which will mark a person’s memory for their complete entire life, an experience that will never be forgotten or erased.

Betrayal is the ultimate trial that one could ever experience apart from death itself.   Jesus suffered the ultimate betrayal when he was sold for thirty pieces of silver by a man called Judas Iscariot who was amongst the very company of disciples Jesus had previously hand picked. It is hard enough when you have to handle betrayal from someone you know to be an enemy, or maybe a distant associate or workmate, but not from some one you trust and consider to be a close friend, which is the hardest the most difficult of all trials.

The worst part about betrayal is, that the betrayer is usually doing it, because there is a financial or personal advantage and reward to be gained by him, so you as the betrayed, feel your dignity is violated as you have become just a simple tradable commodity bought or sold at someone’s whim or fancy. It leaves you with the feeling that you no longer have any self worth or value as you have been sold out. You feel humiliated, abused, deceived and even disemboweled in a sense. You feel like your whole insides have been ripped and torn apart. Hence the English phrase "thrown to the wolves which is the analogy to describe betrayal." A persons heart and spirit after betrayal, can be absolutely crushed and shattered like a piece of glass into a thousand pieces from which they feel they will never experience restoration to become complete and whole again.

In psalm 55 King David describes his own hurt and pain which he experienced from intimate betrayal and I guess you could not get more deeply hurt from any one than a direct strike to the heart and spirit than from your own son. That is exactly what happened to King David, you can sense the anguish and pain in his words where he pens his hurt and declares the following. "It was not an enemy that lifted up his hand against me, it was my familiar friend, and we walked hand in hand into the house of the Lord together and sought sweet counsel. If it was an enemy I could have handled it but it wasn't, it was my familiar friend." You can hear the question and anguish in his statement a deep sense of insecurity from the broken trust as he cries out these words. Sometimes we never can explain the reasons why these things happen and even the betrayer in many cases has no logical reason than a momentary breath of pleasure.

In times like these you call out more from a sense of lacking personal identity, for you can not find the justification in all your searching’s, for someone you trusted, to allow or in severe instances to intentionally plan your downfall. The why may never be answered, as long as we are on this earth and as a result we have to make a valued decision for ourselves, maybe more than for the benefit of the betrayer? If we will not forgive we will never forget and if we never forget these things will haunt us down to the end of our lives to the day we die.

The words for forgiveness are very meaningful in particular in the Greek language, there are three of them, firstly let me explain the word ‘love’ to give a basis of understanding the meaning of forgiveness.

There are three differing words in the Greek for love, actually four, but the fourth word astorge is not used in the context that I am discussing here:

'Philadelphia' is the love of friends and of affinity.  If you like, a love that is reciprocal mutual, friendship. A love expressed in the fact that 'I will love you if you will love me'. It is a deep form of companionship ... the love between a man and a woman. Yet this love is still conditional in that  'if I love, you love" ... then "I can stop loving you if you stop loving me."

'Agape' ... the third type of love is totally unconditional, not based on what someone does for you, but given without reservations.  'Agape love' is only ever used when expressing Gods unconditional love. This type of love always forgives, and never holds grudges or resentment.  Iit allows others to be themselves, and to even fail, and makes room for things such as betrayal.

If you analyse what I have said in the foregoing you will realize there is a progression of love, in degrees of intensity in these three words above. Eros is a physical love of sensual gratification but very base. Then the next is Philadelphia a love of the emotion and a unity of mutual affinity of the soul. More than the love of lust it is a love of deep companionship and attraction, not just to get but also to give. This is a love from the mind or senses, the soul, the intellect, the emotion, the will. Then there is the final word Agape, A love of covenant, a deep bond in the spirit based in honour and commitment depending upon your integrity and word. So there are three areas of significance here fleshly erotic love or lust, a soulish psychological love of friendship, and the ultimate love of spiritual covenant that will never be annulled.

It is amazing to see these three areas body, soul, spirit. It is the same in the Greek with the word forgiveness. There is a lesser level word for forgiveness at the physical fleshly level. Then there is a secondary level word that is deeper in meaning and is soulish based in the emotion and mind, and thirdly there is an unconditional word relating to the spiritual aspect of man and this word is so full of truth and meaning it is always used when the Bible conveys Gods forgiveness.

These three words in progression are each made up of two separate words, and each is included in the next, they are as follows literally,  luo – apo …. apo – heimi …. heimi - charis

David had many such experiences but Absaloms betrayal must have been one of the worst. The more you lead the more of a target you become, and the more you aspire to the heights in God, the more the Devil will go after you, it is as declared and expressed in the golfing term, you had better get used to it, for it is just par for the course.

The one issue most do not understand when facing deep trauma such as betrayal is that it qualifies one to touch the life of others facing similar experiences. We would rather avoid these hurtful experiences but the fact remains, there is no better person to relate and console some one who is suffering deep betrayal than some one who has been through deep betrayal themselves.

An interesting scripture is mentioned in Solomon’s wise writings in the book of Ecclesiastes where he states, "I have seen under the sun where God has given sore travail unto the sons of men that they might be exercised there in. The truth of what is being conveyed here is that, God has seen that the thing that men particularly need, is not necessarily what man thinks he needs. That thing is trial and sore or deep travail, we do not like it when it comes but the reality is, there is nothing better for us, but to experience it, because it matures us as nothing else can or does.

No wonder Peter the apostle instructs us, not to think it strange or weird when fiery trials come upon us, to test us, because when we are tested it is like the refining and purification of gold. When it is put in the fire it is actually the heat and the crucible that gives the gold its value and when it comes out from that process it is made more pure.

Some years ago while I was travelling in Papua New Guinea a group of pastors gave to me a jar of gold dust, and told me, different members of their highland church congregations had given the gold into the offering bag as their tithes. They asked me if I would take it and exchange it for cash for them in Australia which I did. To help them out I asked them if they knew the value of the gold in the jar, they told me it was worth four thousand dollars, so I gave them four thousand dollars.

When I arrived back in Australia and sent the gold in to cash it up and get our money back the refiners told us, the gold was only worth around three hundred dollars as it was full of impurities and needed to be refined. I found out the hard way that gold has no assayed value until it has been through the fire and through the crucible. So it is with our faith, it has no real quality and value of its own until it has endured the fire of testing and afterwards produces the characteristics of patience mercy and understanding. As the Bible puts it the refining fire produces in us the peaceable fruits of righteousness if we allow it.