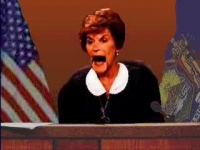 A most curious phenomenon of ‘gibberish’ speaking reporters sweeping North America has gained its biggest victim to date after reports that the entertainment giant known as Judge Judy (left) had production halted on her highly syndicated show.

She was brought to hospital after she began speaking nonsensical words during a live taping. According to Hollywood reporting website RadarOnline.Com, “Judge Sheindlin was rushed to a Los Angeles hospital Wednesday morning after she suddenly started saying things that didn't make sense, a studio insider revealed. “She was just sitting on the stand during her show taping and she started saying things that didn't make any sense.”

Judge Judy (aka Judith Sheindlin) is one of America’s top paid celebrities earning over $45 million-a-year and recently topped The Hollywood Reporter's Women in Entertainment Power 100 List, coming in at No. 48. This phenomenon was first discovered a few weeks ago after CBS reporter Serene Branson during a live Oscar broadcast started speaking nonsensical words to shock of her audience and all of America.

Next to be overtaken by this phenomenon was Toronto’s Global News’ Mark McAllister who, likewise, during a live broadcast [bottom video left] started speaking nonsensical words during a live news broadcast.

Quickly following McAllister was Madison, Wisconsin’s WISC-TV news anchor Sarah Carlson who, like all before her, began speaking nonsensical words during a live news broadcast too.

To the cause underlying this phenomenon many hours have been spent among US news commentators and medical experts trying to explain what appears to be unexplainable, but to no conclusion other than their suggesting that this phenomenon may be related to as yet unnamed health issues. These explanations, however, fail to account for the many physical discrepancies between those being affected by this phenomenon leading one to seek more logical explanations as to its sudden occurrence.

After our own research into past similar occurrences, where sudden instances of nonsensical speech began appearing in ordinary people having no previous health issues, we found an exact match of what is now occurring when a demonstration of US Military microwave technology was demonstrated on a live television news programme.

The demonstration of this technology was given by Dr. Elizabeth Rauscher and Dr. William van Bise, who directed magnetic signals into the brain of CNN reporter Chuck DeCaro where they created visual images as in a hallucination and he began speaking nonsensical words.

This program also featured Dr. Robert O. Becker, two time Nobel Prize nominee, scientist and researcher of electromagnetic radiation effects on the body and author of Body Electric, who summarized, “The government has never disproved the psychological effects of electromagnetic radiation.” Dr. Robert Becker commented “that this is a substantial step forward in the understanding how the visual system works” and would be “a powerful weapon if used on fighter pilots while trying to fly.” [Note: US copyright law forbids our posting of this programme, but for $55.00 copy of this tape you can call CNN at 404-827-2712 and ask for R2501 #13, R2747 #33, R2501 #15, R2501-#17. It runs about 20 minutes.]

To what the reason(s) would be for the US Military to begin testing such a powerful weapon against American and Canadian reporters it is not in our knowing, other than to point out the obvious fact that nothing has ever stopped them from such madness in the past. [Note: For your further research into these weapons please go to this report: Microwave Mind Control Symptoms & Published Evidence and watch this video titled Judge Judy 4th to speak gibberish on the air (1 month apart each) ]

© March 31, 2011 EU and US all rights reserved. Permission to use this report in its entirety is granted under the condition it is linked back to its original source at WhatDoesItMean.Com.