You are here: Home / Church / “I have not seen Iniquity in Jacob nor Perversity in Israel”

“I have not seen Iniquity in Jacob nor Perversity in Israel”

This scripture mentioned above in the title to this article is to me one of the most amazing scriptures I know, in the whole of the Old Testament. Let me quote it in full then I will explain the background and then attempt to give a detailed expose on what is to my ay of thinking nothing short of an unbelievable truth and picture that is so revealing concerning Gods Grace and mercy.

The scripture quoted in reference, is in Numbers chapter 24 where the prophet Balaam requests from the God of Israel permission to curse the very children, God had just led out of Egypt. The king of the land and territory that the children of Israel needed right of passage to pass through, was afraid so he commissioned the prophet Balaam to put a curse on the nation of Israel to bless him and protect him from them.

Here following, is the scripture quoted in full.

"From the tops of the mountains I behold him, from the heights I see him, a nation strong and separate from the rest of the nations. A nation strong and blessed who has the shout of a king in the midst of them, God has not beheld iniquity in Jacob neither has He seen perverseness in the heart of all Israel"

When you understand, and grasp the significance of this passage of scripture, its ramifications are absolutely immense even miraculous. It prophetically reveals the atoning work of Christ on Calvary’s cross because a little later Balaam actually adds and a star shall appear out of Jacob and a stem or sprig out of the root of Jessie and Shiloh shall be his name. So this whole message refers to Messiah the coming one and the forgiveness he will offer us all. This very passage with its old testament message unveils and predicts the depth of Gods great boundless mercy and forgiveness which will avail for us all in a future time.

Stop for a moment and read the passage of scripture in its context as well as the preceding chapters to get the background to the story. What you will find is that the children of Israel did nothing but complain and bicker against God and Moses. They constantly criticised God, murmuring against him and demonstrated exactly what he said he did not see or focus on. INIQUITY and then PERVERSITY, First let me ask what is iniquity then we will look at perversity. 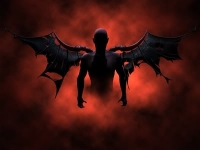 Iniquity is the word that is used in Isaiah 14 where it refers to Satan, Lucifer when he fell from his position in Gods heaven. Isaiah states "How art thou fallen Lucifer, you who were created perfect in all of your ways until INIQUITY was found in your heart."

Iniquity is the total defiance of respect toward all imposed boundaries. In other words it is extreme self will that refuses to submit itself to a superior.

It means to overstep fences, and to take possession of territory that is not yours and it also conveys the idea of violating lines of delegated authority. So in a nutshell it means insubordination to God given authority.

That’s what Lucifer did and caused his ejection and his disqualification from all things godly, but that is what Israel did also, but how come they were not ostracised and cast aside. That is the point I am making here, they should have been also but for the grace of God. The difference between Satan and Israel’s sin is this. Satan fell and was beyond redemption because as you still see he refused any reconciliation because He is still convinced the throne of heaven can be his. I personally believe he, because of his rebellion, placed himself beyond any hope of redemption.

Israel on the other hand, when forgiveness was offered took it and requested forgiveness following their repentance and Gods grace granted it unreservedly.

What is more, Gods compassion and mercy once offered and received holds no grudges, records no offences and retains no memory of what has been done.

The Psalmist as well as Isaiah retain the account in scripture that Gods forgiveness is so vast and all encompassing that it says you can never measure the distance as to how far God removes our sin from us when we are forgiven. It is comparable in the Hebrew to endlessness or infinity, for the actual word means vanishing point. Oblivion would be the best English word to explain it.

Not only does the Bible tell us God removes our sin far from us but that he also buries it in the depth of the ocean of His forgetfulness, never to be remembered again, never again. This is what Father God through Christ has done for us all when we sincerely repent and ask him for his forgiveness. What amazing grace we are offered truly amazing without condition or reservation all that is asked of us is to simply walk in his light and if we sin we are to ask for his forgiveness and He will forgive our sins and cleanse us of all unrighteousness. Our sins are erased for ever never to be brought before his or our memory and remembrance again. It is worth noting that if our sin is forgiven and forgotten the moment we repent and request forgiveness sincerely then who is it that keeps reminding us of our past sins Satan of course, it certainly is not God, yet we listen to it and accept his condemnation over past sins again and again, which really is an insult to the grace of God.

As regarding the second word mentioned and referred to above "perversity" it simply means corrupt seditious even subversive, these are the very things Israel was doing to both God and Moses. yet God instructs Balaam to speak these incredibly compassionate words over Israel his people in spite of their absolute maliciousness toward him earlier.

The final thing I want to make reference to is the fact that God emphatically rebuked Balaam and instructed him to say nothing more or nothing less than that which God said he was to say. So what was actually said was exactly what God wanted his people past and present hear exactly these words no more no less and that should give us great comfort as we are to hear his exact injunction today and realise these words for us are to reveal his amazing love mercy and forgiveness.