You are here: Home / Prophecy / Who Goes There? … The Grim Reaper, Apollyon, Abaddon The Destroyer … Awaits At Your Door

Who Goes There? ... The Grim Reaper, Apollyon, Abaddon The Destroyer ... Awaits At Your Door 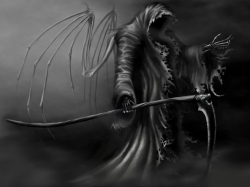 I believe, according to my personal views of Biblical prophecy and understanding of world events, that we are seeing not only the melt down of financial institutions ... but the entire melt down and collapse of confidence in all humanistic and global systems.

Whether you agree with my assumptions or not ... only time will tell.  As always, time is the great leveller and the ultimate filter of all predictions.

That is not to say that what I anticipate will change in the near future, because like all humanistic intellectual conceit it resurrects itself to arise from the ashes like the occultic phoenix and continues to do, and replicate what has always already been done.

Satan is not a creator only a replicator of those things God has created. He distorts Gods creation and perverts it, representing it as his own. The results of that sort of reasoning is just to solidify the same old well worn conclusions, so all things stay the same nothing changes. For you see, to keep doing what we have always done will only ever produce the same results that we have always ever received.

The only way things will ever change is by looking at the basic reasons as to why we do things and begin to change our attitudes and motives for doing them. The major problem is, you can never get consensus from all peoples, so peace can never come without a dictator. That in itself is a scary thought but one which the Bible makes clear will come to pass for the only way a God rejecting, self reliant, unholy society can exist is by a totalitarian dictator with an authoritarian rule of law. Believe me it is closer than you think.

These idiotic folk that promote the philosophy of a new age utopia coming whereby we as individuals are evolving in to a peaceful, compassionate, gracious, all accepting social community are promoting fantasy, an impossible dream. While human ego and hearts are involved in this change process you can kiss a better future goodbye. Why you ask? SIMPLY BECAUSE AS THE BIBLE REVEALS IN THE BOOK OF JEREMIAH THE HEART OF MANKIND IS DESPERATELY WICKED AND DECIETFUL ABOVE ALL THINGS, MAKING IT IMPOSSIBLE TO GAUGE THE INDIVIDUAL HEARTS MOTIVES, thus incapable of discerning them. And if you think you are the exception you are dreaming, and in a fantasy land, better men than you have tried and failed.

I might add around now that I do not advocate silence as a response from us, who are detractors and opponents. In fact on the contrary, I advocate more vocal provocation for biblical and moral change. We can no longer afford to sit and watch the change for the worse take place, and not raise an opposing voice, that at least gives an alternative opinion, even if it does not turn things around. While the atrocities continue to be perpetrated by the high profile power mongers who will not control their own personal demons, but who want and attempt to inflict them upon the rest of society, it allows us no alternative but to recognise and conclude all things will continue as they are.

That brings me to the point of this article, some tell me you have no faith in human nature and I have to acknowledge, yes that is true. While man is in control of his own destiny there will be no good lasting outcome. Man is incapable of that. So my prediction is this -we are fast approaching the entire meltdown of all history and society as we know it. Men will not make the changes nor take the high road of decision that are necessary to initiate the reformation needed. No moderate wants to stick his neck out and have it attacked and so only the radical, that exerts his extreme view, gets heard. The reason for this is because he is the only one that has courage enough to speak out, not being concerned at all as to what the public opinion of him might be. We do not realise our silence lends consent to the prevailing acceptable viewpoint if we do not speak out.

The Book of Ecclesiastes informs us that because sentence is not executed speedily against an evil matter then the hearts of the succeeding generation are convinced that the evil being promoted is acceptable, because we who are moral and know better, will not challenge the error. The Bibles wise instruction states, even if the opposition happens to be from the ruler of the land, that challenges us to be silenced in our opposition to evil, we must not be persuaded or manipulated by him. We must speak up because our silence gives acceptance and consent to those who look to us for direction, as to what is right or wrong concerning a matter. Our reactions, or lack of them, speak to our children more than our actual words, and when we remain silent they conclude the wrong must be okay.

Because of this I believe God is grieved with us, his people and as the scripture states in the book of Revelation it actually makes him vomit, and so he will spew this unbiblical contemporary sin sick church out of his mouth. If you don’t think God would do that read his scriptural instructions to us and to the leaders of the church in Corinth mentioned in first Corinthians chapter 5. It counsels us there, to take the leaven permeating sin out of the church and cast it out of our midst. It goes so far as to tell us to hand the particular sinner who will not repent over into the control of Satan, so that God will allow the angel of evil, Satan himself to harass and intimidate him, thus driving the sinner back into the arms of the church and the arms of a forgiving God.

All the bleeding hearts and spineless compromised diplomats in the Christian camp will about now raise their vehement objections to what I have just declared, but will they demonstrate that same indignation against the immorality and paralysis within the church they belong to …… NEVER. Why may I ask, it is because they do not want to be labelled as a divisionary? The reason is this. We have been taught that unity above all else, is the absolute aspiration of all believers’ unity at all costs at any cost. What rot, unity is in itself a by product of something else, and that something else is LOVE. The love here I refer to is Gods definition of it. It includes love based on truth, righteousness, justice, godliness, honour and biblical respect, for everything God himself deems important. Apart from that there is no unity. Light has no fellowship with darkness and the scripture clearly states HOW CAN TWO WALK TOGETHER EXCEPT THEY BE IN AGREEMENT. Unity comes out of relational affinity and commitment to one another with common principals, certainly not from a political compromise for mutual advantage.

Folk do not realise that it mentions in that previously mentioned chapter of First Corinthians Five, that these instructions do not just apply to people caught in sexual sins but also to extortionists, liars, gossipers and the like. We should care more about people’s souls than we do about their physical bodies, and if we did we would not allow the church to condone nor protect these corrupters of truth from exposure when they sin. The same portion of scripture instructs us, to put out of our midst those who do these things but we refuse and in turn obligate the Lord by praying and asking God to correct our children and others who commit these sins. We condone these sinners by our silence to their evil deeds and therefore we choose not to act by not wanting to expose them. Yet the very thing that will bring them to God defined by his injunction written here is for us to hand them over to Satan, who will scare them back into the arms of God.

What do we do, however? We pray to God that God will deal with their sin. HE WILL NOT! Read 1 Corinthians 5. again, a little further on in the chapter, it states, “We, the church leaders, are to deal with the sin that is committed within the church. God will deal with those who sin, and are outside the church beyond its protection. For this very reason we are commanded to release sinners inside the church to Satan, (Gods agent of discipline), who is outside the church. When that takes place God will use Satan to get at them, and they in turn will return to the pure church for its protection and covering once more, as happened in the particular case mentioned in the above quoted verses.

The fallen angel who is over the bottomless pit is called the destroyer. He is named as Apollyon in the Greek language and Abaddon in the Hebrew language. He is joked about in heathen circles, as the Grim Reaper. In the book of Exodus he is called the angel of Death, in Malachi 3 he is called the Devourer, and in 1 Corinthians 15 he is simply referred to as that last enemy, Death, the Destroyer. There are various other titles by which he is known in scripture and occultic circles but the overall meaning is the same no matter where you find him. His abode is the abyss, and Hell itself is always associated with him, as in Revelation, destruction follows hell. Shiva in the Hindu religion is the being of destruction, and that creature reveals to us, not one who should be worshipped or feared as they do, but on the contrary, one who is to be shunned and rejected, for any association with this being brings only catastrophe. This demon has no power over a God fearing Christ honouring believer, only over those who will not submit to God and his word.

If you find you have given the destroyer legal ground and authority to enter your life, family and business it is because you are not living your life in truth and purity before God as the Lord would have you live it. Therefore, the destroyer then has the power to strip you of all your dignity, health and assets and your only hope is to turn back to the protection of God by living as he has instructed you to live. What we are seeing right now is God doing what we as a church were commanded, but refused to do. So in order for Christ Jesus to have a spotless bride who is ready for him when he comes, the Lord has to purge and purify his church through discipline himself.

Let me ask you where do you stand in light of this factor? Is your life and testimony in line with his will for you or are you finding the devourer is taking away your produce and harvest. If so, then you had better repent and ask God for grace to make the changes you need to make. Do not put it off. This issue is critical especially as we see everything falling around us. The biblical book of Hebrews states God is going to once more shake the entire earth and everything in it, so that only the things that are of God will continue and remain. Everything else is destined for destruction, to be given over to the hands of the destroyer to whom it belongs, for this angels inheritance also is destruction.