You are here: Home / Political Control / Martial Law is the option we will all face in the coming days 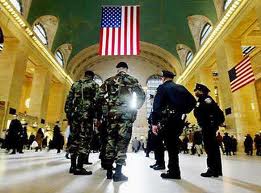 It is very interesting listening to the conversations of simple folk everywhere as I travel globally these days, I am finding that a great deal of their communication revolves around the title given to this article above. It is amazing to find the incredible anomaly now emerging also in regard to the ex communistic USSR republics contemporary perception of it also. Particularly the present advice and comments coming from the Russian Duma (government) and president Putin himself. They have been recorded as saying that the USA is heading down the very path of totalitarianism that the eastern communist block has itself just exited from. They have been strongly advising and cautioning the USA from entering this dangerous and destructive consideration and period.

To add to this incredible and laughable paradox is the fact that there is a monumental movement of wealthy capitalistic western middleclass businessmen seeking entry and citizenship and legal immigration to the Russian nation at the same time as many US citizens globally are rescinding their personal rights to their own nation of birthright. I once heard a funny quip that said when the world starts treating the comedians seriously and alternatively treat the politicians and courts as a joke then we will need to wake up fast and realize society and civilization is in deep trouble.

Even the article below on the Russian political website listed as www.whatdoesitmean.com under the direction of the matriarchal mystic Sorcha Faal, alludes to the very dangerous situation developing in the United States of America under the administration of democratic leader President Barrack Obama and his socialistic leaning administration. The scary part that now seems apparent is we here in Australia have become so closely aligned and financially manipulated by BIG BROTHER AMERICA thanks to our present labour parliament, not that I think a change of political government will make and difference as we are controlled by US bucks and bullies. I can not see anyone in this present national leadership labour or liberal with the courage or conviction to make the decisions necessary to walk an independent path solely with the future good of just and godly Australian principles in mind.

Because of the above we are seeing the imposition here as well as in America of the same military industrial complex ideals to control all citizenry by means of a universal currency and political totalitarianism that will ultimately empower the elite few at the expense of the corporate masses whereby they will take ownership of not only every thing of value but mankind himself. When you read in the prophetic book of Revelation John the Apostle records the fact that the time of the apocalypse he describes will be characterized by the elite of the day trading in gold and silver and timber and every commodity imaginable, but the to my alarm one day I saw it ended by saying they will trade in the very souls of men. In other words men will be forced into slavery by a powerful elite whose wealth and power is not satisfied by the ownership of chattels alone but of people and humanity as well. So like it or not we also will follow Americas example and will see the implementation of some for of martial law in the nation and that process has begun already but that article will hold for a yet further day when I will elaborate on that.

By: Sorcha Faal, and as reported to her Western Subscribers A new report issued by the Federal Service for Military-Technical Cooperation (MTC) circulating in the Kremlin today states that General Staff officers were warned this past week by their American counterparts at the North American Aerospace Defense Command (NORAD) that the threat to overthrow President Obama by “certain elements” within the US Military is “nearer than first thought” and could very well cause a state of martial law to be declared in the United States.

Russian officers reporting to the Kremlin on this shocking turn of events were training with US and Canadian military personal at NORAD during their annual Vigilant Eagle terror exercise and noted that this is the second warning they’ve received this summer about the plan to overthrow Obama, and as we previously reported in our 20 July report US Military Reveals Coup Plan To Topple Obama.

The details relating to the United States building of Permanent War Economy in the aftermath of World War II were, perhaps, best articulated by the noted American professor emeritus at Columbia University Seymour Melman (1917-2004) who in his historic 1976 book titled The Permanent War Economy: American Capitalism in Decline predicted the global economic collapse currently underway and warned of the horrific, indeed apocalyptic, world war soon to follow.

According to professor Melman, who wrote these words of warning 36 years ago, the United States Permanent War Economy would so economically devastate the US, that by the year 2015, over 3.5 million manufacturing jobs would be moved offshore threatening the very survival of his country as its capital markets could not support the sheer weight of a military budget seeking to control the entire world, while at the same time supporting a vibrant civilian consumer economy. Unfortunately for the United States, professor Melman’s estimates of the manufacturing jobs that would be lost by 2015 have far exceeded his predictions with new estimates showing that over 5.7 million of them have been lost in the last twelve years alone, a staggering figure that dwarfs even those losses suffered by America during the Great Depression.

As the American economy races towards financial oblivion, its military forces now occupy nearly the entire planet with estimates showing 60,000 US special operations forces are conducting assassinations, night-raids, training missions, joint operations and exercises in 120 countries, double that when Obama came to power, with deployments in nearly 70 countries. So economically powerful has the US military become, this MTC report says, in order to pay for it the US Federal Govt added $2.33 in debt for every $1 increase in GDP this past year alone causing the Vanguard Group, one of USA’s largest mutual fund, to warn this past week America is facing a “fiscal train wreck” also popular American politician Wayne Allyn Root, likewise, warned America is “on the brink of the greatest Depression of all time.” Federal Security Services (FSB) addendum to this MTC report notes US federal police forces have begun isolating to capture rogue US military elements plotting an Obama regime overthrow with members of one such militia group named F.E.A.R, (Forever Enduring Always Ready), being arrested this past week, and who were all reported to be active duty soldiers in the US Army.

Fears of Obama declaring martial law are not confined to this report only as many US news outlets warn of the same. Influential InfoWars.com on August 30 wrote Bullets, False Flags and Biological Warfare: What Is the US Govt Planning? Even govt insiders say “It’s Going Hot” and: “A staged “event” will be carried out within the domestic US. While many purvey false information to confuse the issue, upper levels of DHS had “a major slip up” and this information was released to the informant. It suggested that Obama would save his political image if he were to have his own Oklahoma City Bombing.”

Top Kremlin intelligence analyst Igor Panarin, dean of the Russian Foreign Ministry School for future diplomats, believes Obama will announce martial law by the end of 2012. Explaining: “There’s a 55-45% chance disintegration will occur.” In 2009, Panarin lectured at the Diplomatic Academy where he said he believed USA will begin to collapse in 2010. He compared America to Nazi Germany and blamed the US for the global financial crisis that destroyed the Russian economy. Most ominous in this MTC report, is its warning that due to accelerating food prices which from June to July this year saw corn and wheat prices rise 25% while soybean prices increased 17%; Russian experts say, this could very well see a global war for resources begin as not even America will be able to afford to feed its citizens.