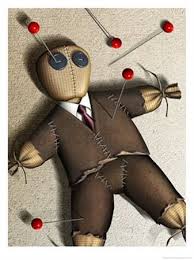 For the mystery of iniquity doth already work: only he who now letteth will let, until he be taken out of the way. And then shall that Wicked be revealed, whom the Lord shall consume with the spirit of his mouth, and shall destroy with the brightness of his coming:

Even him, whose coming is after the working of Satan with all power and signs and lying wonders, And with all deceivableness of unrighteousness in them that perish; because they received not the love of the truth, that they might be saved.

And for this cause God shall send them strong delusion, that they should believe a lie: That they all might be damned who believed not the truth, but had pleasure in unrighteousness.”

Voodoo in its most simple of terms is a religion based on superstition and “black magic.” The term “black” insinuates a connection to the dark side. It is a religious system of ‘superstitious works that count on forces from the “dark side” perpetuating good.

Even if it appeared to be “good”, any voodoo action that resulted in “good” would be a counterfeit. Darkness is never able to present light…no matter how “good” the result may be. Remember, we are told that Satan often appears as an angel of light.

Here are a few examples of voodoo beliefs:

• A lock of a girl's hair brings good luck.
• If you lay a broom across the doorway at night, a witch can't come in and hurt you.
• If a woman visits you first thing on Monday morning its bad luck for the rest of the week.
• Don't borrow or lend salt because that is bad luck.
• If you sweep trash out of the house after dark you will sweep away your luck.
• Don't shake a tablecloth outside after dark or someone in your family will die.

Superstition is “A fearful or abject state of mind resulting from ignorance. Idolatry.

I would like to lay before you today the premise that superstition and idolatry has crept into our churches today. Much of what Christians believe today is “based on unrealistic or delusive assumptions” and is evidenced by “deceptive and delusive nonsense.”

In short, Voodoo Christianity is running rampant in our churches.

Jesus is the light. The Bible is His Word. If you hold to a belief system that is contrary to the principles that one finds in the Bible then your belief system is faulty. Any belief that runs counter to scripture comes from the dark side. There is no “grey” area with truth.

But that is the poison that our culture has tried to feed us. Moral relativism, tolerance, diversity, and “acceptance” of sin are all examples of “spells” that have been cast over America from the dark side. “The Church” used to be the antidote to this “voodoo” belief system, but in the last generation we have seen the beliefs become “doctrine” in our churches. 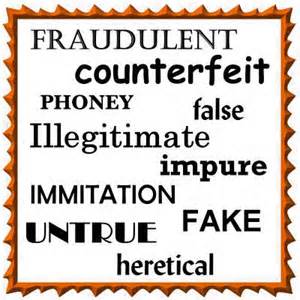 Is your church a purveyor of Christian Voodoo? Have many of the things you believe come straight from the darkside? Does much of what your teach fall in line with the “doctrines of demons?”

“Now the Spirit speaketh expressly, that in the latter times some shall depart from the faith, giving heed to seducing spirits, and doctrines of devils; Speaking lies in hypocrisy; having their conscience seared with a hot iron;”

A seared conscience refers to one who is no longer moved by a sense of right and wrong. Is that you? Has your conscience been seared by “Voodoo Christianity?”

If you believe that God is not upset by the murder of unborn babies and that it is possible for you to be “pro-choice” and a Christian, then you are a practitioner of Voodoo Christianity.

Although God is completely good and wants the best for all of His children He did not suffer and die on the cross to enhance your life. If you believe that Jesus died to give you a bigger house, improved finances, and a name-it-claim-it attitude towards this life then you are a practitioner of Voodoo Christianity.

God is Holy and tells us to strive to “Be ye Holy as I am Holy.” They teachings in our churches that tell us that sin is not an affront to the Lord, that you can continue to go on sinning without impunity, that you can fornicate at will, that you can live with someone with whom you are not married is nothing more than Voodoo Christianity.

God is just and Christians are his enforcers of justice in the earth. To think that Jesus died on a cross to allow His Name to be besmirched in this land; To permit His Name to be removed from the minds of America’s school children; To believe that morality can be taught apart from the Holy Scriptures as the foundation of all moral law is nothing short of Voodoo Christianity.

All of us were made from dirt and to the dirt shall our bodies return. In creating man Yahweh used red dirt, brown dirt, yellow dirt, and white-man dirt. If you believe that the color of the dirt from which you were formed is the determining aspect in all of our worldly affairs then you are under a spell. To go to a” black church”, or a “white church,” or an “Hispanic church” is nothing short of voodoo identity. There are only two races of people…those racing for heaven and those racing for hell. To focus on skin color is Voodoo Christianity.

If you go to a church that believes that Christians are to have no say in the political affairs of this nation is to drink a witch’s brew. Jesus told us we were the “salt of the earth” which insinuates penetrating every area of American life. To leave the “political world” to the Devil’s kids is nothing short of Voodoo Christianity.

Barack Obama is the most dishonest man to ever sit in the White House. His policies are socialist and are designed to undermine the American way of life. He believes in homosexual marriage, post-birth abortion, the destruction of individual God-granted rights, and that the birth of a child is “punishment” in certain situations. If you are a Christian and voted for him you are a believer in Voodoo Christianity.

If you are trusting in the Republican Party to cure all of America’s ills; If you think the Republican Party wants to end abortion; If you think they are for smaller government and less spending; If you believe they are determined to over-turn Obama Care; And if you believe that they are for the protection of individual God-given rights then you are practicing Voodoo Christianity.

The book of Genesis is very clear. God created the heavens and the earth in six days. God created man in His own image. Man did not evolve from pond scum and our distant grandpa was not a chimpanzee. If you believe that what Charles Darwin wrote is truer than what the Bible teaches, then you are engaged in Voodoo Christianity.

Public schools have been seized by atheistic-humanists. Although the teachers may claim adherence to Jesus and the Bible, the doctrine being espoused in all of the government schools in this nation come straight out of the Devil’s rulebook. In fact, “Christian” teachers are playing on the Devil’s team by teaching these deadly doctrines to innocent children. If you are part of teaching to children things that are not true then you are practicing Voodoo Christianity.

Although Jesus did speak the words “judge not” in Mathew 7 that does not mean that Christians are supposed to accept as truth and teach to our children that “Christians are not supposed to judge.” On the Devil’s list of commandments to be taught to our children that is number 1. If you believe the malarkey that judging the behavior of others is “unchristian” then you are practicing Voodoo Christianity.

Jesus uttered the most intolerant message in the history of the world when He declared “I am the way, the Truth, and the Life, no one comes to the father except by me.” To believe that there are many paths to God is nothing short of Voodoo Christianity.

If you are going to call yourself a Christian then believe what the Bible teaches, do what the Bible says, and follow the roadmap that it lays out for us. To do anything else makes you a Voodoo Christian and a follower of the dark side.

“If the light that is in you be darkness, how great is that darkness.” “For ye were sometimes darkness, but now are ye light in the Lord: walk as children of light.”