You are here: Home / Church / THE “NEW BREED” OF CHRISTIAN FASHION 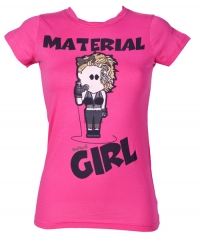 A couple of weeks ago, while I was surfing the net for articles to include in the Email Brigade News Report, I came across a piece entitled “Provocative Clothing Company Creates Tees to Help Christian Girls be ‘Playful’ for Jesus.” For obvious reasons the headline grabbed my attention.

Featured in the article is a picture of an attractive young woman in a sexy pose seated on a bed wearing a tank top with the words “God knows my secrets.”

From the Christian News Service story:

A California-based clothing company is targeting professing Christian girls who seek to be provocative and “playful” in the way that they dress, all in the name of Jesus Christ.
The company Heart OMG says that its line of clothing for girls is “heavenly inspired” and is “a delightful mix of fun, fashion, faith and love.”

“At Heart OMG, we believe in sharing our faith and love through fashion, while embracing our fun and characteristic lifestyle, as well as giving back to the ones in need,” the clothing company’s website states. “Every single irresistible Heart OMG piece is wonderfully made to complement those playful and fashion forward individuals who celebrate life, and are eager to make their faith and love a true influence to the world.”

If you visit Heart OMG’s website (although I don’t recommend it) you’ll discover the story of “New Love and True Love”:

Once upon a time three lovely girls found a new love in Jesus Christ.

God had gifted each girl with a special talent. They gathered their gifts and became the worship crew at church. Through music they expressed their faith & love. This love grows stronger every moment.

The girls soon realize that this new love is definitely the “True Love” they had been looking for.

It all starts on a sunny Sunday morning. Scroll down the page and you’ll see photos of the trio sitting in a convertible in front of a church. Two girls are wearing off the shoulder t-shirts and, it appears, nothing is worn underneath. On the front of one of the shirts is the graphic “Worship Crew.”

Another photo shows the titillating trio decked out in short shorts, four inch heels and a pound and a half of makeup on their faces as they stroll up the walk toward the church…looking like hookers.

Further down the page the girls are now lounging on a bed together in suggestive poses. One of them is sporting a pink night shirt with a large graphic of an ice cream sundae with a cherry on top. “Sweet Jesus” adorns a purple cup.

Under the heading “When New Love Becomes True Love” one of the girls is reading a Bible (hopefully 1 John). The shirt she’s wearing has a graphic of two large red apples. You can guess where the apples are purposely placed. What does this tell you about the creative minds that designed a whole collection of “Christian” t-shirts?

Another photo shows the trio in church perched on what appears to be the edge of the stage, hands clasped in prayer. The girl wearing the “Worship Crew” shirt has an open Bible on her lap. Two of the girls are wearing off the shoulder shirts that are, well, way off the shoulder…in church.

If the trashy apparel Heart OMG produces is “heavenly inspired” like they claim, I’m the Angel Gabriel.

As I investigated the website I discovered this tidbit in the “About” section:

EVERY SINGLE IRRESISTIBLE HEART OMG PIECE IS WONDERFULLY MADE TO COMPLEMENT THOSE PLAYFUL & FASHION FORWARD INDIVIDUALS WHO CELEBRATE LIFE, AND EAGER TO MAKE THEIR FAITH & LOVE A TRUE INFLUENCE TO THE WORLD.

If the advertisements/photos on the site depict the fashion trend for the “new breed” of Christian women, then the visible Church is in far worse shape than I thought.

Before I move on I need to make something clear. I’m not saying that the girls in the photos are Christians. I came across an acknowledgment at the bottom of the page stating only that they’re models. But that’s neither here nor there. The fact of the matter is that whoever owns Heart OMG has hired models who presumably are Christians. Certainly the girls who visit the site think they are! And let’s not forget that a photographer is involved and perhaps a marketing person as well. I’m going to presume these people are professing Christians. And if that’s indeed the case, my question to them is, why do you choose to participate in pushing a clothing line that dishonors God?

For years I’ve reported on the ways Hollywood and the liberal elite have made it their goal to sexualize young girls (here, here, here, here and here). However, this is the first time I’ve dedicated an entire article to so-called Christians who seem bent on sexualizing teens and tweens.

I first wrote about tawdry church attire in 2006 and conveyed how the pastor of my former church handled a sticky situation:

The church I attend once held outdoor services during the summer. Not anymore. The reason given by our pastor--with no apology--is the “inappropriate way people dress.” When it’s hot outside some folks show up pretty much undressed, and I am not prone to exaggeration. Women attend services dressed in short shorts, low-cut clingy tops, or crops. In some cases skintight low-rider jeans are worn as low as they go so that permanent artwork (tattoos) etched into backs and hips can be viewed by all. Excuse my bluntness, ladies, but exposing your butt crack in church is unacceptable, even if you’re sporting a Rembrandt across your back.

I also objected to the clothing worn by young guys, the ones who aren’t the least bit concerned with their grungy appearance. But my point here is that Bible believing, God honoring Christian females mustn’t wear flashy, flamboyant, tight fitting, low cut, sexually explicit clothing to church – or anywhere else! Being uninhibited and unreserved may be A-ok with “Sweet Jesus.” But being “too sexy for my shirt” is not A-ok with the Jesus of the Bible.

In like manner also, that women adorn themselves in modest apparel, with shamefacedness [modesty of appearance and manner] and sobriety [self-restraint].

Likewise, Peter had something to say to women in the early church:

But let it be the hidden man of the heart, in that which is not corruptible, even the ornament of a meek and quiet spirit, which is in the sight of God of great price. (1 Peter 3:4)

As obedient children, not fashioning yourselves according to the former lusts in your ignorance: But as he which hath called you is holy, so be ye holy in all manner of conversation; Because it is written, Be ye holy; for I am holy. (1 Peter 1:14-16)

Getting back to my’06 article, I pointed out that one of the problems with trying to be cool is that,followers of Jesus aren’t supposed to be cool; they’re supposed to be holy. But few pastors preach on holiness these days. Even though we serve a holy God and are called to be holy as He is holy, the message of sin and repentance has been diluted to appeal to the “felt needs” of today’s self-absorbed audience. People want to leave the church feeling good about themselves. No one wants to hear anything “negative” anymore. “That’s what liberalism is,” says Gene Edward Veith, “changing your theology to fit whatever the culture is.” (Source)

Our younger generation is being preyed upon by adults that will do anything for a buck. Adults are the ones who peddle the raunchy products that hyper-sexualize the culture. Young people, especially, are demeaned and exploited for profit. A word of warning to sleaze peddling “Christians”: God deems what you’re doing a grave sin. Repent!

Back in 2008 I penned a piece entitled “Hyper-sexualizing girls.” In it I described how even professing Christians are participating in this terrible offense against God. I asked, And what, pray tell, is the Church doing to put a stop to the madness? The sad fact is that many Christians have yielded to the culture. And those that have are just as complicit in hyper-sexualizing youngsters as liberals are. So I pose this question to followers of Jesus Christ: Why do you suppose the world doesn't believe what Christians have to say?

The answer is that Christians don't live what they say they believe. Instead they live like the world.

“The Christian life,” says Warren Weirsbe, “is not a playground, but a battlefield.” [Read Eph. 6:11-12] Those who commit to follow Jesus Christ have got to get off the playground and make haste to the battlefield. Your children's future is at stake. And I'm not talking to you nominal Christians. I'm talking to those who are serious about their commitment to Christ. Yes, fighting the culture is an uphill fight. But we can win some battles! “We are hard pressed on every side, but not crushed; perplexed, but not in despair; persecuted, but not abandoned; struck down, but not destroyed” (2 Corinthians 4:8-9). (Source)

In closing, I’ll restate what I said above. Bible believing Christians who really want to glorify God must steer clear of the “new breed” of Christian fashion and dress modestly. Believers must pray that so-called Christians who are promoting trashy clothing to impressionable girls will have a change of heart. What can change hearts and minds? The Gospel of Jesus Christ!

Should Christians "judge" others? You betcha! —By Marsha West