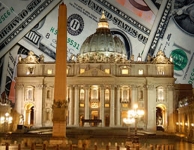 With increasing fear among ordinary people about financial elites and their manipulation of money markets, the Vatican has decided to make matters worse by adding its own bizarre twist to the problem: It has proposed a supranational authority to manage a new global bank. Not only would financial power rest in the hands of a world body like the UN, but the Vatican would like all countries to cede some of their sovereign powers to it.

One of the great ironies of the Vatican concept of a super authority is that it meets the very criteria the Bible warns against in the Book of Revelation, such as the emergence of a world financial system.

None of this troubles the pope, however, perhaps because his Vatican Bank does business worldwide. It is known to have investments scattered across the globe, some of which are hidden behind multilayered shell companies. The Vatican Bank’s ability to move large sums of money in and out of Vatican City and between private banks is legendary. In 2010, it was caught with its hands in the criminal cookie jar when Italy’s economic intelligence investigators discovered it was secretly moving tens of millions of euros into a JPMorgan account in Frankfurt, and between private banks elsewhere.

The best-known example of criminality by the Vatican Bank, formally called the Institute for Religious Works (Istituto per le Opere di Religione), was its 1982 role in the $3.2 billion collapse of Banco Ambrosiano, a private bank in which it held the major stake. Banco Ambrosiano chairman Roberto Calvi was later found hanged under Blackfriars Bridge in London. Cardinal Paul Marcinkus, a former American football player who was the Vatican’s man at Banco Ambrosiano, was never prosecuted because the Vatican claimed he had diplomatic immunity. Before his 2006 death in Arizona, Marcinkus refused to explain how Banco Ambrosiano became a laundering house for international crime syndicates.

Pope John Paul I may have been alerted to some of Banco Ambrosiano’s activities as early as 1978, but he died mysteriously 33 days after being elected pope. While the Vatican attributed his death to a heart attack, some thought otherwise, claiming he had posed a major threat to powerful interests in the Vatican and outside it because he had threatened to investigate the Vatican Bank and its dealings with Banco Ambrosiano.

Perhaps it is understandable that the Vatican, which is a powerful world body, is advocating the creation of a super committee to control global finance. Presumably the pope’s bankers, who pretend their focus is on faith and morals, would wish to be represented on the board of such a new world bank and the supranational authority overseeing it.

The Vatican’s financial proposals came in the form of a document issued by the Pontifical Council for Justice and Peace. It condemned the fall of Lehman Bros. that preceded the recent financial collapse and said the decision to let Lehman Bros. fail was the result of “a liberalist approach, unsympathetic toward public intervention in the markets.” The council also called for a community of nations to meet the growth of globalization with “one public authority having universal jurisdiction.” Its creation would not happen without “anguish and suffering,” the council warned.

The pope’s financial mandarins were careful not to spell out in detail how each country would be required to transfer some of its powers to the world authority or which powers they had in mind. Nevertheless, they took a sideswipe at the International Monetary Fund, implying it could no longer fulfill the role of a global financial guide.

It is unlikely the Vatican Bank will become any more transparent about its inner workings than it has been to date. After all, it still refuses to open its files to those who would like to know what it did with the hundreds of millions of gold coins secretly and illegally moved into its vaults by the Croatian State Treasury at the end of World War II.

Richard Walker is the pen name of a former news producer.