You are here: Home / Recent / So Much Points To Agenda 21

Just about every day we can see U.N. Agenda 21 playing out in the flesh. U.N. Agenda 21 is United Nations Agenda 21, it is about the depopulation of the entire world to a total of 500 million people....that's right, total world population 500 million......7 billion DOWN to 500 million. The Georgia Guide stones are proof that this Agenda is real because if it were not truth the U.N. would have them removed. They state the following. 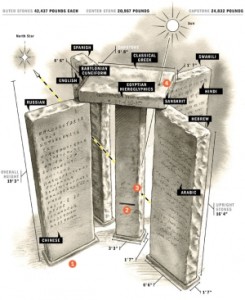 -Maintain humanity under 500 million in perpetual balance with nature.

- Rule passion - faith - tradition - and all things with tempered reason.

- Protect people and nations with fair laws and just courts.

I'm not going to go into all of the statements above in this article only the first one, however I will say this about them. Why not just use the Ten Commandments found in the Bible ? they are good. No, there is more to the Georgia Guide Stones than meets the eye.

Satan knows only to well human nature and it's lack when it comes to their own safety zone being threatened, if the Police turn up next door, most people would peer through the curtains and watch the neighbors be dragged away no questions asked as it is the Police, we don't question the Police as they are always right, mmmmmm. If my neighbors had the Police turn up I would be out to make sure everything was above board. If only we could down load the Anzac Spirit into the minds of people which is....Never leave a mate behind. We need to at every chance we get, expose the truth, stick up for those that are down and out because the likes of those supporting U.N. Agenda 21 are being paid, are profiting from it and will do their best to see it through.

So as I was saying, nearly every day we see Georgia Guide Stone Commandment number one playing out in real time and here is what I mean. Late last year I was driving through a school zone and at the end of the zone were two Police Officers trying to catch motorists after they had sped through the zone. I stopped to ask one of the Officers this question. Why are you sitting at then end of the zone hoping that motorists do the right speed through the zone and hopefully not hitting and killing a child, wouldn't it be better if one of you stood one at each end of the zone in clear site for motorists to see you then be reminded to watch their speed guaranteeing the safety of the children instead of hiding behind your Police car out of sight at the end of the zone ? The Police Officer didn't like my question. It's common sense to me that this would save lives and therefore maintain the population. These are little children, but few people care and this was the exact attitude of the Police Officer. The Police Officer told me to write a letter to the local member of parliament, to which I replied why don't you write one Officer as it would have more of an effect than if I wrote it.

Nine years ago I was having a spa bath on my back deck when I heard a commotion coming from the back yard of the neighbors, I stood up in my spa to see the man next door grabbing his ten year old son around the neck and slapping him across the face. I yelled out and told the man to stop, he continued to abuse the boy, I yelled again, the man continued, this time I yelled at the top of my voice with all I could muster and began to get out of my spa and make my way to jump the fence, the man stopped and went straight inside leaving the poor boy in tears in the back yard. I rang the police, made a complaint immediately implying the boy should at least be removed for the night. I then stood on my back deck for the next two hours, no police came. I often wonder if that poor boy is ok today, he would be around twenty or so, I wonder if he is even alive.

This year on Anzac day I had lunch with a group of close friends, at the table was a person who was a part of the military effort that was ready to deal with the Lindt cafe siege in Sydney Australia where the Muslim extremist Man Haron Monis had a number of hostages held. This person is a professional in the field, I will not disclose as to what part this person played whether it be administration or on the ground purely for this persons protection. What happened next disgusts me. The Military had access to the building plans and were ready to go through the roof, down the elevator shaft and pull back the suspended ceiling panel and put one bullet in the gunman..... Job done, guaranteed no harm to the hostages. This is what they are trained to do and are far far far far better at it than the Police. This person also made comment of how unprepared our Police were and how they bungled the whole charade. The bottom line is this, The Abbott Government wouldn't give the go ahead for our military to act and save lives. As a result two families had to bury their loved ones which could have been avoided.

I want to make a clear statement about this article... I have no favoritism toward any persons... I am not against any particular body as there is good and bad in most situations and in most organizations, I also realize that I, like all of us have fallen short.

We must come against the New World Order In every way we can and at every chance we get.

At the end of the day U.N. Agenda 21 has many faces at many levels and in this article I have only touched the surface of day to day life. Agenda 21 is a demonic spirit in action and it prowls where it feels.