You are here: Home / Recent / Oh Ye Of Little Faith

I write this article with only a small notion of the direction it is to take but never the less....here we go. I by no means what so ever consider myself to be of great stature in fact if I am half the man I claim to be I would have to say that the Lord has been doing some serious pruning when it comes to my character as he often does with his children. In fact lately I feel that if he prunes anymore there may be nothing left to trim. I write this not for any sympathy as that is certainly not me, but purely to encourage those out there that may be feeling the same way and to say this....head up, keep going. The title above refers to when Jesus challenged the disciples as they were in fear of what the storm may bring. I aim it at myself and to say this, it will not be man that calms the storms ahead, but Jesus. This is something that we need to keep in mind as the storms of life are usually a distraction from the work that God has for us to do.

A few days ago I sat in a couples lounge room and as I began to talk to them, a 20 minute meeting turned into a 2 hour session. I soon put aside the detail of my visit when I realised that God had me there for his purpose, not mine. The husband began to tell me how he lost his father to a horrible disease, as I listened to the story he told me how close he was to his Dad, how he and his Dad had constructed the pergola outside together only a few years prior and that it ripped him in half to see him go to his death in such a terrible way. He told me how strong his Dad was physically and how in the end he looked nothing like the strong work mate that had helped with the pergola. The descriptive words he used to tell the story of his fathers death were nothing compared to the pain I saw in his eyes as he held back tears. Up until this point I had not told him that I was a Christian however it was when he told me the following that it was time for my ears to close and my mouth to open. He told me of how he was a man of faith, a Christian, how his mother had visited many churches in search of healing prior to the passing of their family member. And then he said that he used to be a Christian but now he doesn't know anymore. He said, " I have read the Bible but how do I know its true." I said to him that Gods ways are certainly not ours and that its often a tribulation like this that God will use to bring us closer to him. I said much more and wrote down some scripture to try and do my bit to help him through his loss and as I left his house he thanked me for my time spent.

I drove away thinking I needed to hear that as much as he did, it was God"s meeting not ours.

Above I mention the word, " tribulation. " And in the the article that Brian wrote on the 19th he mention's the notion that some of the church believes God is coming back to whisk us away from the nasty devilish end time tribulation. Over the years I have listened to only a few words spoken about both for and against a pre - tribulation Rapture as very little was taught on the subject in the circles I fellow-shipped in. Quite frankly at times I have been left more confused rather than having a light shed on the subject. I also will admit I was depending on others to give me the answers rather than to seek them for myself. I have not shared the following with many people before except my wife and a few close friends but after Brian's article I felt it was time to share publicly.

Approximately 18 months ago I was reading the Bible, going over the scripture that we find in Mathew 24 where we find two in the field, one is taken and the other is left. I have heard it said that this is the rapture of the church, I have heard it said that the one taken is just taken away to prison however I am not interested in man's debates on the topic but the scriptural truth and or the Holy Spirits revelation. I closed my Bible, and thinking back over the years of all the discussions and all the scriptures thrown across the pulpits on the topic of the rapture, I said to the Lord. "Lord what is the truth on this topic ?" In true God fashion he answered me with this Question. " Why should I change my ways now ?" I thought, what are Gods ways ? He shut the mouths of the lions while Daniel was in the den. He made Joseph a great leader. Shadrach, Meshach and Abednego did not bow their knees and did not so much as have a hair singed. All of these men made it through their tribulation. What are God's ways ? They are perfect. He is the same yesterday, today and forever. I believe without a shadow of a doubt that as long as we don't bow our knee and if we stay close to Jesus we will endure any tribulation. Perhaps we may be broken in the process, in fact I think we will, but the trimming of the tree is necessary. 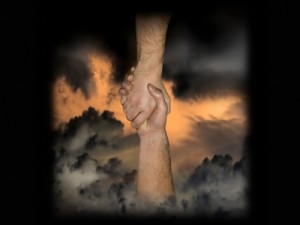