You are here: Home / Editorials / Brian Hay Editorial … “The Fallacy Of Ignorance In An Informed World”

“The Fallacy Of Ignorance
In An Informed World”

It never ceases to amaze me how most folk are prepared to trade their freedom for slavery simply so as to alleviate their daily grind and duty to not only provide for their families but also direct them successfully into their own secure confidant and self assured future.

The gospel of Jesus Christ was not delivered to us to just pacify us in our desperate fallen state, neither was it given to just comfort and console us with sympathy. 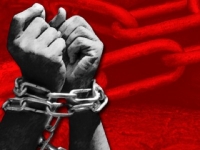 It was delivered to us so that as we embraced it, its power and wisdom in our daily lives, would change our perception of ourselves and then by that change our personal individual circumstances and subsequently then our environment.

The gospel is all about change, not just change for the sake of change but change for the purpose of liberating us from sin and guilt and giving us a hope and a future whereas before the gospel came we had none of these assurances or blessings.

The bible states in Ecclesiastes that God has given labour and trial to the sons of men so that he may be exercised and matured by them. The psychologist Carl Jung once speculated that ninety five percent of all mental health problems are directly the result of mans struggle to alleviate personal pain and responsibility. In other words man does not want to have to think he would rather someone else did his thinking and made his decisions for him.

The story is told of a young eight year old boy playing in the snow covered streets of New York one Christmas, at that same time, his rich aunt was coming to stay for a few days. As the young boy played in the snow covered streets his toes peeped out from the well worn holes in his shoes. One of the soles of this little boys shoes had separated from the leather upper cover and was flapping loosely in the cold air, but yet unperturbed he played amongst the snow.

His aunt walked down the street where he was playing and recognised him and saw the state of his shoes. She walked over to him and grasped his hand and immediately led him into a nearby cobblers shoe where he made shoes, and then ordered a pair of shoes for the little boy. The cobbler asked the young boy what shoes he would like, black or brown, boots or shoes. The boy answered black in colour and shoes not boots. The cobbler asked him slip on shoes or lace ups, lace ups he replied. One more thing the cobbler requested round toes or square toed.

The young boy had said enough as far as he was concerned and therefore ran off to join his friends, the aunt paid the cost of the shoes to the cobbler and said she would return after asking the young boy as to whether he wanted round or square toed shoes. The cobbler said do not worry as that young boy plays in this street every day he reassured the aunt, he would get the answer from the boy over the next few days.

After several days of questioning the young boy without a successful answer or conclusion, the cobbler decided he would make the shoes anyway, which he did. Some days later he delivered the box of shoes to the home of the young boy and to his parents surprise he had made one shoe square toed and one shoe round toed. Many years later at the inauguration of Ronald Reagan to the position of president of the United States of America, Reagan took those same shoes from the old box and held them before the people and told the history and story behind those shoes.

He told the entire facts surrounding them and then said I was that young boy and then commented by saying, "One thing I have learned from this is, IF YOU DO NOT MAKE YOUR OWN DECISIONS THEN SOMEONE ELSE WILL MAKE THEM FOR YOU" This is a true and factual story. The reality is more serious than is the story, we as citizens have abdicated our responsibility to society and given over its control to other less scrupulous people because we did not want to personally get involved.

Hitler who was actually a close confidant of Carl Jung mentioned earlier in this article, also issued a similar philosophical observation in saying "Oh how fortunate for dictators like myself and others before me, that most men do not read and also never question." If we will not take responsibility for own lives and the direction of our own personal destiny, then someone else will. They will automatically determine life’s important decisions for us. It is inevitable and can not be avoided.

Tyranny can only ever gain a foothold because of these same reasons, when we hesitate and become stalled because of indecision, others will step into the vacuum and immediately take up the reins of control and thus who reigns controls and if it is not God it will be despotic.

Jesus said in the gospels this generation they serve me with their lips but their heart is far from me, and things have not changed at all through the centuries they still do the same today. People will tell you what you want to pacify you but have little or no intention of fulfilling their verbal commitment what so ever. They want all the benefits but no obligation or commitments, so they will say what they think you want to hear so they will be accepted and treated with respect.

They do this for various reason but mostly so that they will be treated exactly same as those who are committed. The problem never reveals itself until you need to call for help especially when a problem arises that is to big for you to handle on your own. That is the time you need support so you put out the call only to find those who responded initially do not show up for the promised assistance. It happens all the way down through society from the top to the bottom, from the politicians to the police from public servants to the private sector, from business to the unemployed. No one wants to do more than what they actually have to.

I am at the moment of writing this article in the east European nations of Hungary Romania Bulgaria and the border of Turkey and it is no act of co-incidence that these nations and cities are very poor and also very untidy and unkempt. When you walk down the streets no one will walk just a few metres to place the rubbish in the bins provided. No one will help when it is obvious you are in distress, the police are reluctant to go out of their way to help, the bus drivers don’t want to talk to guide you and even the poverty stricken gypsies do not want to expend effort to work unless they have to.

Our whole society and mentality now, is to expect someone else who is more qualified and affluent to provide for us, or to act on our behalf and to some degree we have earned for ourselves the term of useless eaters. Very few folk will show any initiative at all to better their plight in life. Those that do become the very rulers over the contemporary mass of followers, and in turn often become their dictator leaders.

I have even walked by beggars in the streets who are obviously in physical disability and can not work and I have emptied my pockets of the coins and cash in my possession into their hands, only to have them look at me in disgust because it is not considered sizeable enough in their estimation. Some have even thrown the money back at me which I find incredible, as I am not a wealthy but also not a stingy selfish individual, and am willing to help people financially in whatever way I can.

Many of these poor people smoke and can readily buy a packet of cigarettes while their children beg for food, I find that offensive, but yet I am aware we have created this scenario with social engineering of all the manipulative elite whose sole ambition is to create two worlds, one for the privileged and one for the outcast drains on society as many consider the poor to be.

People say to me as I travel don’t speak above the people they are very simple folk to which I vehemently protest all communication should possess at least some degree of what is not known to the people. I totally reject that thinking as we are mostly called to be teachers and is that not informing people about what they do not know. Mothers teaching children, employers teaching workers, professors teaching academics, athletes teaching physique, children teaching pets, is this not what language and communication is all about in its basic form.

If language is only ever intended to be a method of communication of what is already known then it is little more than a mode of gossip. We should always aspire beyond our present knowledge and experience, so our teaching and message should always motivate all people to arise to a level above their present station in life not just accommodate what they already know. Even the bible tells us that God himself states mankind is always overcome and destroyed because of a lack of knowledge.

Keep it simple we hear over and over and it irritates me when I hear this, the teacher should never be limited to the simplicity of the people otherwise they will always remain exactly where they are, he should always teach what they do not know so they can embrace it and rise to a better position because of their new understanding.

Once again God in Proverbs 1: 22 declares "How long you simple ones, will you love your simplicity and the scorners delight in their scorning and fools hate knowledge, turn you at my reproof, behold I will pour out my spirit unto you and make known my words to you. Because I have called and ye refused I have stretched out my hand and no man regarded it. But you set at naught annulling all my of counsel, and would have none of my reproof therefore, I also will laugh at your calamity I will mock when your fear comes, when your fear comes as a desolation and your destruction comes as a whirlwind when distress and anguish comes upon you then shall you call unto me but I will not answer. They will seek me early but they will not find me for they hated knowledge and did not choose the fear of the Lord. ........ The apostasy and turning away of the simple will be their destruction!

In the light of all the above and considering the title of this article, the fallacy of ignorance in an informed world, we have to concede there has never been on earth a more informed generation of people than ours. Yet in spite of this we have labeled this our generation as the Epistle of Peter designates it to be, a people who choose ignorance, we take the position to be willingly ignorant. Moreover weeds grow automatically produce has to be cultivated, exactly like our lives leadership and courage does not just happen it has to be formed and developed in order to change our world.