You are here: Home / Editorials / Fun Vax, Chemtrails and Zombies.

For a while now we have seen the increase of Zombie and Vampire type movies come to our screens and yes there was a time when it was all laughable and somewhat fantasy, brushed aside as pure fiction. However if you tried to tell that to Ronald Poppo he would disagree I'm sure. In May of 2012 in Miami Florida Mr Poppo was attacked in such a way that it seriously begs the question of the reality of Zombie-type behaviuor.

Rudy Eugene, a 31 year old man attacked Mr Poppo by literally walking up to him on a side walk next to a busy motorway and began chewing his face off. Mr Poppo's skin was eaten off, his eyes were removed from their sockets and his nose was also devoured. When the police arrived at the scene to find Eugene mauling Mr Poppo they said Eugene was oblivious to his surroundings. Not responding to police requests to stand down Eugene was then shot not once but a number of times before he was killed. I personally have been shot with a slug gun and I can tell you that it is astonishing to me that it took some four to five police rounds to take Eugene down, possessed ?...certainly not normal. The police officers told of the story of how when Eugene was first approached he turned to them, growled and simply continued to attack Mr Poppo's face. This behavior is astounding to say the least some would put it down to another drug related crime however the toxicology result returned a positive to the drug marijuana, not exactly a hard core drug. All drugs and alcohol effect people differently but I find it hard to accept that marijuana would have driven Eugene to commit such a sick attack.

On the 2nd of May 2014 on the Gold Coast of Australia an eighteen year old girl was sexually assaulted on a crowded bus by a 42 year old man. This man is certainly a very sick puppy and should be dealt with accordingly but what astounds me is the lack of the people on the bus, they did nothing to help her. The women in the seat behind her didn't inquire to to see if she was in need of help and nor did the young man in the seat directly across from the poor young girl. And its not as if this was a thirty second attack it went on for , get this, THIRTEEN MINUTES.

It is well known that the U.S. Government has been dumping chemtrails across the states for some time now and in those chemicals are toxins that cause all sorts of deformities to the human body. Chemtrails are dropped from modified planes across the designated area below. Since 2005-6 there has been a chemical added to the mix that goes by the name of Fun Vax, this chemical attacks the front portion of the brain. Put simply this part of the brain allows you and I to determine right from wrong. Thanks to the lack of intelligence by the Australian Government this same chemical is now being distributed across Australia or perhaps the Australian Government is fully aware of how evil this chemical is. Never the less our Government has given its blessing for this to be done. 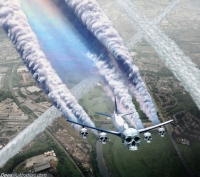 The question I ask in regards to people's behavior is this. Has society become that self centered that it is the norm to simply stand by while a young girl is assaulted on a bus and is it even become the norm to eat the face off a man in broad daylight ? Or are we up against something more diabolical ?